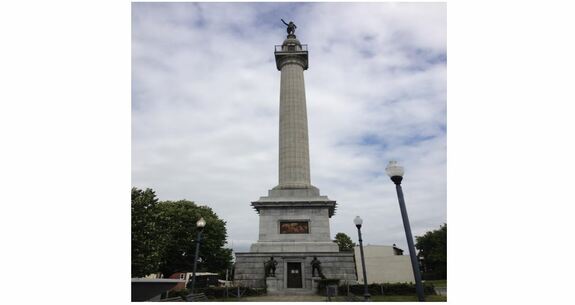 Having retreated out of New York and across New Jersey, the Continentals form a defensive line on the western side of the Delaware River in Pennsylvania. Judging it too late in the season, the British do not pursue, and instead set up garrisons across New Jersey to pacify the colony.

The Continental Army under Washington begins to disintegrate as a British victory seems inevitable, and enlistments come to an end. Out of desperation, Washington launches a raid back into New Jersey on Christmas night. Three of the four crossings fail due to ice in the river, but Washington manages to cross. His small force attacks the Hessian outpost at Trenton, killing the commander Colonel Rall, and taking most of the enemy prisoners.

The Trenton Battle Monument marks the place where the American artillery was placed during the Battle of Trenton on December 26, 1776.

The monument, dedicated on October 19, 1893, features a bronze statue of General George Washington with his right arm outstretched, pointing toward the site of his victory, atop a 148-feet granite column. The base of the monument is adorned with three bronze bas-reliefs (plaques) depicting Washington's army crossing the Delaware River, the opening of the Battle of Trenton, and the surrender of the Hessians. A fourth plaque contains a memorial inscription. The original bas-reliefs, now housed in the New Jersey State Museum, have been replaced with reproductions.

Check the Trenton Battle Monument web site for information on hours of operation.