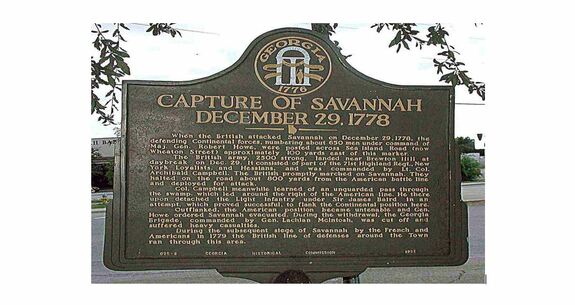 British General Henry Clinton sends 3000 soldiers under Colonel Archibald Campbell from New York by ship to recapture Georgia. Campbell is supposed to await the arrival of General Augustine Prevost from Florida but finds the defenses so weak he opts to attack without waiting.

Continental General Robert Howe attempts to defend Savannah with only a few hundred men. The British obtain intelligence about a path through a swamp that allows them to get behind the Americans before they are noticed. The Americans must flee for their lives. More than half are captured as they attempt to escape.

Months later, the Americans with the support of a French fleet, attempt to lay siege to Savannah and retake the city. The siege fails and the British retain possession.

The Capture of Savannah historical marker, erected in 1952 by the Georgia Historical Commission, is located approximately 100 yards west of where Continental forces were posted to defend against a British attack on December 29, 1778.

Address: On East Liberty Street near Randolph Street – in the median.