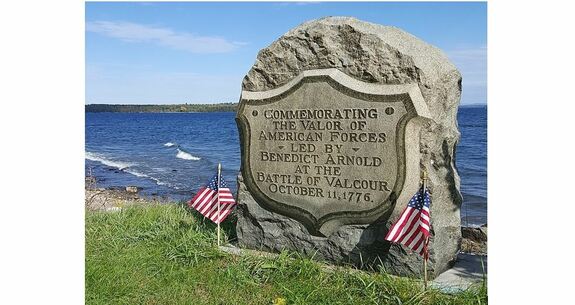 British General Guy Carleton builds a fleet at the northern end of Lake Champlain, with the intent of sailing down and recapturing Fort Ticonderoga. General Benedict Arnold builds a smaller fleet to stop the British. When Carleton sails down the lake, Arnold hides his fleet behind Valcour Island, then appears behind the British fleet where he has the advantage. The two fleets fight for hours as the Americans hold up rather well.

By the time the British reach Fort Ticonderoga, it begins to snow. Carlton judges that it is too late in the season to begin a siege. He withdraws back to the northern end of Lake Champlain.

Valcour Island is one of six islands in the Lake Champlain Islands Complex which encompasses approximately 1,162 acres of Adirondack Forest Preserve land. Valcour Island can be reached from the Peru Boat Launch near Plattsburgh, NY.

A monument commemorating the battle, originally erected in 1928 along the shore of Lake Champlain, now sits along the north side of the boat launch just east of the parking lot.