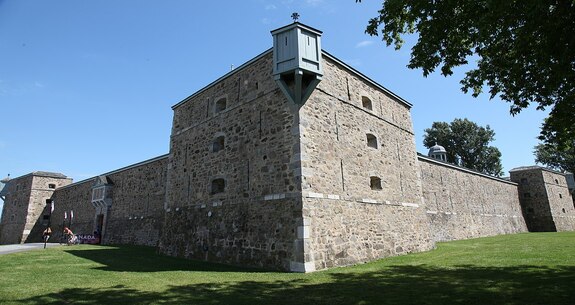 General Richard Montgomery leads an army from New York against Quebec. At the same time, Colonel Benedict Arnold leads a second army across the Maine wilderness, targeting Quebec from the other direction. The Americans successfully capture Montreal and most of the British regulars in the area. British General Guy Carleton manages to hold Quebec City, mostly thanks to loyalist militia.

Montgomery and Arnold besiege the city but realize that disease and expiring enlistments make a continued siege impossible. They agree that their best chance is a direct nighttime assault on Quebec City. Montgomery is killed in the first volley of the battle. Arnold is also shot and badly wounded.

Colonel Daniel Morgan leads a small force into the city, but the attackers are quickly surrounded and captured. The British hold the city until reinforcements arrive in the spring.

Fort Chambly National Historic Site, a Parks Canada site, features restored main components of the original fort. Fort Chambly was occupied by the Americans during the winter of 1775-1776.

At Fort Chambly National Historic Site, you can walk the grounds that were occupied by General Richard Montgomery and his troops starting in November of 1775. A number of tours are offered at Fort Chambly National Historic Site, including a tour of the fort which was built in 1711. The fort includes thematic exhibitions that chronicle the history of New France, including its military role in various conflicts.