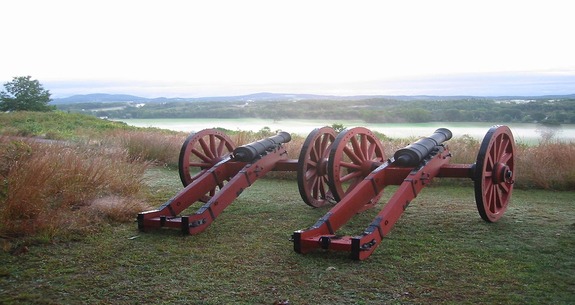 Despite losses at Fort Stanwix and Bennington, General John Burgoyne continues his march south through upstate New York. General Horatio Gates takes command of an army on the heights near Saratoga, where militia continue to swell his ranks.

Burgoyne tries to force his way past the Continentals, but is confronted by Continentals led by General Benedict Arnold, first at Freeman’s Farm, then a few weeks later at Bemis Heights. Arnold takes the fight to the enemy, against the orders of General Gates. He manages to force the British to pull back each time.

Cut off from his supply lines, General Burgoyne agrees to surrender his army at Saratoga. Gates is credited with a major American victory.

Saratoga National Historical Park, authorized in 1938, preserves and protects sites associated with the battles, siege, and surrender of British forces at Saratoga, which were decisive events in the winning of American independence. The Park is comprised of four non-contiguous sites in Stillwater and Saratoga, New York.

The visitor center is located in the Saratoga Battlefield unit of the park.

The John and Lydia Neilson House in the Saratoga Battlefield: John and Lydia Neilson, married in 1775, built this house on land he had leased. When they learned the British army was invading New York, Lydia returned to her parents’ home in Stillwater and John joined the local militia. Officers of the American army occupied the Neilson’s home beginning in early September 1777. General Enoch Poor of New Hampshire and General Benedict Arnold of Connecticut were quartered in the house according to an account from the time of the battles.