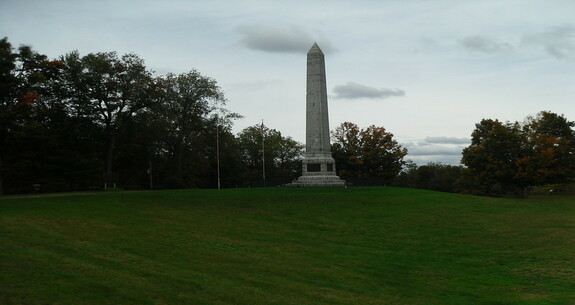 General John Burgoyne launches a new assault from Quebec, this time capturing Fort Ticonderoga without a fight. The Americans withdraw before the superior force. Burgoyne hopes to move south and eventually link up with the larger British army in New York City.

General Barry St. Leger leads an army of mostly militia and Iroquois warriors, along with some regulars. His mission is to pacify western New York, then join with Burgoyne’s army as it moves south. St. Leger captures Fort Stanwix and sends out a force composed mostly of native warriors to confront the patriot militia marching to threaten the fort.

A short time later, General Benedict Arnold arrives and tricks the British into believing he is going to overrun Fort Stanwix with an overwhelming force. The British forces retreat in a panic and return to Quebec, denying General Burgoyne much-needed reinforcements.

Oriskany Battlefield State Historic Site commemorates the Battle of Oriskany, considered one of the bloodiest battles of the American Revolutionary War.

The Oriskany Battlefield State Historic Site includes a visitor center with exhibits and walking trails. On the battlefield is an obelisk that was dedicated in 1884 to serve as a memorial to those who fought in the battle. Plaques at the base of the obelisk commemorate the battle and its participants. Historical markers providing information about the battle are posted along the walking trail.