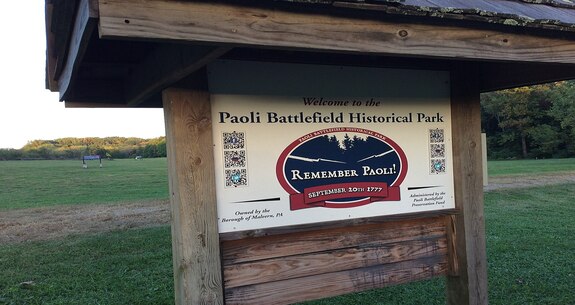 Americans, under General “Mad Anthony” Wayne, try to shadow the British as they advance toward Philadelphia. General Howe deploys General Charles Grey to crush the Americans. Grey orders his men to remove the flints from their guns to avoid shots that would alert the Americans.

The British attack the American camp at night, using bayonets to slaughter the sleeping Americans.  Most of the Americans manage to escape in the darkness, but there is no longer an effective force to challenge the British entry into Philadelphia.

The Paoli Battlefield Historical Park, a 44-acre historic site of woodland and farm fields, commemorate the Battle of Paoli which is also known as the Paoli Massacre. Adjacent to the park is the Paoli Memorial Grounds which includes an obelisk that marks the gravesite of fifty-two Continental soldiers.

The Battle of Paoli received its name due to its proximity to the Paoli Tavern, a well-known landmark in 1777. You can visit the battlefield, owned by the Borough of Malvern and administered by the non-profit Paoli Battlefield Preservation Fund, and walk the ¾-mile trail that includes interpretive panels about the battle.

The Paoli Memorial Grounds, owned and operated by the non-profit Paoli Memorial Association, is adjacent to the battlefield park. On the memorial grounds you can view the 1817 stone monument, which was erected on the burial mound of the American soldiers who lost their lives in the battle. Also on the memorial grounds is a larger granite obelisk that was erected in 1877 to commemorate the 100th anniversary of the Battle of Paoli.

The stone monument marking the gravesite. Erected in 1817, it is the second oldest Revolutionary War monument in the country.