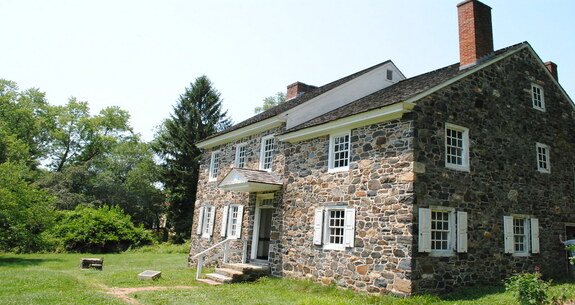 General William Howe takes the bulk of the British army aboard ship from New York to the Chesapeake Bay. He then marches north to take Philadelphia from the south. General Washington and the Continentals form a defensive line at Brandywine Creek, just south of Philadelphia.

The Battle of Brandywine was the largest single day engagement of the American Revolution where nearly 30,000 soldiers squared off on a ten square mile area. Brandywine Battlefield Park is a 52-acre park that encompasses the epicenter of George Washington’s continental encampment.

The visitor center offers an orientation film, exhibits, and a museum store. You can also tour two houses of significance in the park:

Typically, the following annual events take place at the park:

Guided battlefield tours for groups can be arranged. For the 1 ½ hour bus tour, a well-informed guide onboard the bus will describe the various sites that encompass the massive landscape of the actual battle grounds.

Check the Brandywine Battlefield Park web site for information on hours of operation, house tours, and arranging a group tour.