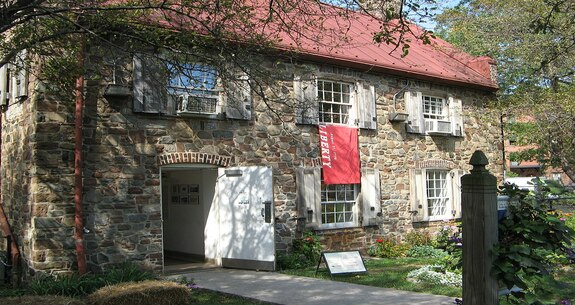 The British arrive with a force of over 40,000 regulars, Hessians, sailors, and marines to take New York City. They take their time, first landing on Staten Island, in preparation for confronting the Americans on Long Island. Washington deploys Continentals under General Nathanael Greene to meet the British on Long Island. The Americans deploy along the Gowanus Heights. The British discover an unprotected area on the Continental’s left flank at Jamaica Pass.

While the British distract the Americans with a frontal attack, another division uses the Jamaica Pass to get around the American lines and attack from the rear. Many Americans are killed or captured. Among those captured are Generals Lord Stirling and John Sullivan. The Continentals scramble back to the East River, where British forces plan to take them the following morning.

That night, Washington orders a secret withdrawal back to Manhattan. Poor winds keep the British fleet from blocking their way. By the next morning, only part of the army has crossed, despite the best efforts of Colonel John Glover. An unexpected fog keeps the British from discovering the withdrawal and allows the Americans to complete their retreat to Manhattan.

The Old Stone House & Washington Park, a part of the Historic House Trust of New York City, preserves and teaches local and national history that has impacted the historically significant Brooklyn neighborhood. The Old Stone House in Washington Park is a reconstruction of the 1699 Vechte-Cortelyou House that marks the place where the original Dutch farmstead stood, and where the culminating engagement of the 1776 Battle of Brooklyn took place.

The Old Stone House museum features a permanent exhibit exploring the Battle of Brooklyn and the Occupation, 1776-1783. The self-directed exhibit includes ten themed areas that allow visitors to explore the battle and occupation history and consider how war and displacement impacted the community.

Download The Battle of Brooklyn, August 27 – 29, 1776: A Walking Guide to Sites and Monuments from the Old Stone House & Washington Park web site. This 37-page resource includes information on all recognized Battle of Brooklyn sites, scattered throughout 72 square miles of the borough.