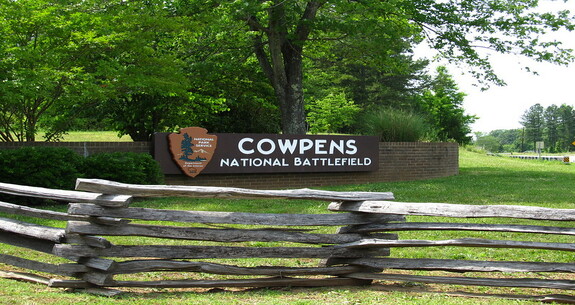 General Cornwallis leads British regulars into North Carolina. General Daniel Morgan confronts the British at Cowpens. Morgan puts his unreliable militia in the center of his line. He tells the men that he needs them to fire only two volleys, then they can withdraw.

British Colonel Banatre Tarelton sees the American center falter and retreat. He leads his men in a charge into the retreating center, only to find himself surrounded by Continentals on both his left and right flanks. Almost all of the British engaged are killed or captured.

Cowpens National Battlefield, a unit of the National Park System, is a Revolutionary War battle site that commemorates the victory of Brigadier General Daniel Morgan over British Lieutenant Colonel Banastre Tarleton. At the time of the battle, the Cow Pens was a well-known pasturing area in the upcountry of South Carolina.

The Cowpens National Battlefield includes a visitor center, a walking trail, and an auto loop road around the perimeter of the battlefield. At the visitor center, you can view Revolutionary War artifacts, exhibits, and a laser disk presentation titled “Cowpens: A Battle Remembered.” The Battle Trail is a self-guided 1.2-mile walking trail that includes wayside exhibits and a portion of the historic Green River Road that both armies used to get to the Cow Pens. You can travel the perimeter of the battlefield and view additional wayside exhibits on the 3.8-mile auto loop road.

Check the Cowpens National Battlefield web site for information on hours of operation.

The Battlefield Trail, which begins and ends at the Visitor Center, is at 1.25-mile self-guiding walking tour that includes a portion of the original Green River Road along which the battle was fought.