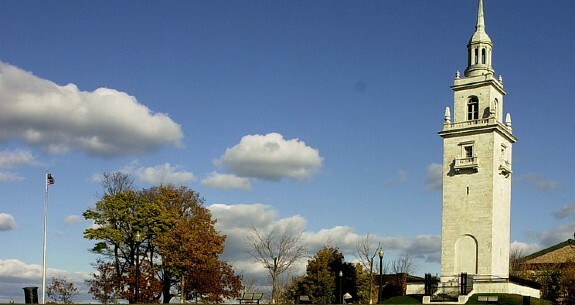 Shortly after Bunker Hill, the New England Army becomes the Continental army, with General George Washington in command. The two armies face each other month after month in a siege, with neither side sure how to take the advantage. Washington tasks Colonel Henry Knox to take a group of men to Fort Ticonderoga in New York. Their task is to bring back dozens of cannons to use against the British.

On the night of March 4, the Continentals execute their plan to occupy Dorchester Heights just to the south of Boston. The British are stunned to see cannons in place on the heights the next morning, ready to fire on the city, as well as ships in Boston Harbor. General Howe realizes, to his great embarrassment, that he has no choice but to evacuate Boston earlier than planned.

Dorchester Heights is one of eight sites that comprise Boston National Historical Park, which was established in 1974. The Dorchester Heights site, atop Telegraph Hill, includes an elliptical park named Thomas Park and a 1902 marble-clad monument designed by architect firm Peabody and Stearns.

You can walk the grounds of Thomas Park, read the inscription on the monument, and take in the view of Boston from the site. The monument, a white marble Georgian revival tower, was commissioned in 1898 by the General Court of Massachusetts to commemorate the 1776 victory. In addition to the monument, there is a replica cannon resting atop a six-and-a-half-ton granite mount which was installed on the site in 2016.