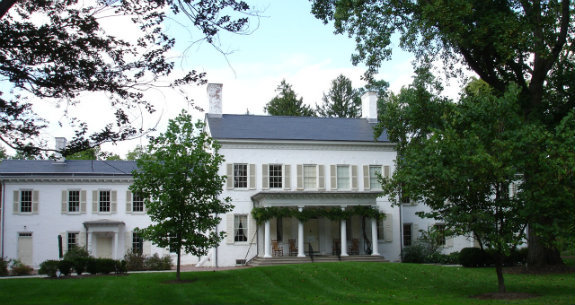 Home to one of the signers of the Declaration of Independence and to five New Jersey governors, Morven has played a role in the history of New Jersey and the nation for more than 250 years.

Richard Stockton (1730-1781) built Morven in the 1750s on land granted to his grandfather by William Penn in 1701. After a fire in 1758, the home was rebuilt and christened Morven, (“big mountain” in Gaelic) by Richard’s wife Annis Boudinot Stockton (1736-1801). Richard was a graduate of the first class of The College of New Jersey (now Princeton University) and became a prominent lawyer. He was one of five New Jersey delegates appointed to the Continental Congress where he signed the Declaration of Independence. The British ransacked Morven later that year, capturing and imprisoning Stockton. He was released in January 1777. Annis is one of America’s earliest published female poets, immortalizing heroes of the Revolution such as George Washington, who called her “the elegant Muse of Morven.”

Four more generations of Stocktons resided at Morven through the early 20th century before the property was leased to General Robert Wood Johnson, Chairman of Johnson & Johnson and the first non-family member to live there (1928-1944). He was followed by five New Jersey governors when Morven served as the state’s first Governor’s Mansion (1945-1981).

After the Governor’s Mansion was relocated in 1982, Morven went through an extensive restoration and archaeological investigation. Morven re-opened as a museum and garden in 2004.

An unprecedented public and private partnership coupled with an extensive document search and archaeological excavation provided the foundation for a comprehensive renovation of Morven that began in 1999.

The program restored historic features of the grounds, including an 18th-century horse chestnut walk and a colonial revival garden. The buildings were returned to original colors, 20th century alterations were removed, and historic features, such as the renowned parquet floors, were re-installed.

An extensive nine-zone environmental system allows the museum to individually regulate temperature and humidity in each gallery, and security, lighting, fire suppression, and handicap-accessibility systems place Morven at the forefront of industry standards for museums.