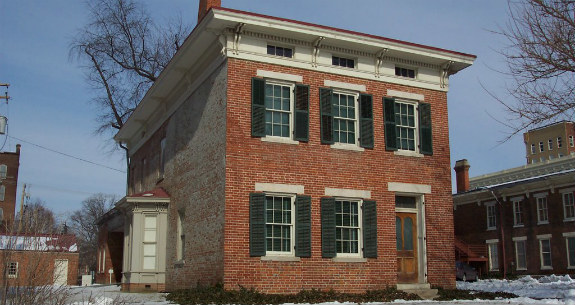 Courtesy of the Friends of Dr. Richard Eells House

Dr. Richard Eells built this home, now located within the Downtown Quincy Historic District, in 1835. Eells built only the front portion of the house as it stands today, four blocks from the Mississippi River. He lived here until his death in 1848. Quincy, Illinois, was the first Underground Railroad station across the border of Missouri—a slave state. An abolitionist, Eells was actively involved in the Underground Railroad. In 1842 he was caught helping an escaped slave, Charley, from Monticello, Missouri. Charley was brought to the Eells house by a freed black, Barryman Barnett, who had spotted Charley swimming across the Mississippi River. While transporting Charley to Quincy's Mission Institute, a safer hiding place, Eells came across a posse looking for Charley. Charley fled, on Eells's advice, and was later found and returned to Missiouri. Eells returned home where he was shortly arrested and charged with harboring and secreting a fugitive slave under the Illinois Criminal Code. Judge Stephen A. Douglas heard the case in April 1843, and fined Eells $400, which he appealed.

Meanwhile, Eells became president of the Illinois Anti-Slavery Party in 1843 and was a candidate for the Liberty Party for the presidential election of 1844. He lost his appeal to the Illinois Supreme Court, the process of which drained him financially and emotionally. Eells died on a river boat on the Ohio River while on a a trip east to rest. His estate appealed his case to United States Supreme Court, which also upheld the guilt verdict. The town of Quincy is also notable as the location of the sixth Lincoln-Douglas debate of their senatorial campaign on October 13, 1858, a debate which centered on the question of expansion of slavery.