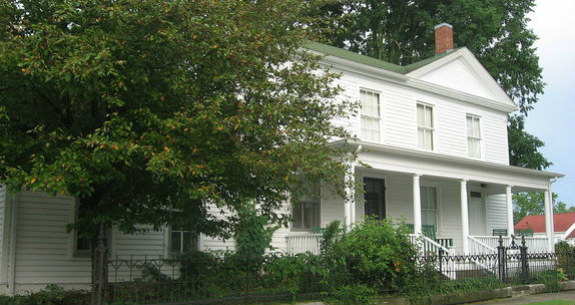 Dr. Hiram Rutherford (1815-1900), a doctor in the prairie town of Oakland, was a recognized abolitionist in Illinois. He is notable for his association with the Matson Trial of 1847, the only known case in which Abraham Lincoln, then a circuit rider, defended a slave owner. In 1840 Dr. Hiram Rutherford had come to Illinois from Pennsylvania where he studied medicine at Jefferson College and grew up in an abolitionist family. Dr. Hiram Rutherford built his two-story frame house off the square in Oakland in 1847, and his one-room office in 1850. His first wife also came from Pennsylvania after he was established, and his second he met during the Matson Trial.

General Robert Matson, a Kentucky plantation slave owner, kept a farm in the Oakland area. Each spring Matson would bring some of his enslaved laborers to work his Illinois farm and then take them back to Kentucky in the fall after the crops were harvested. One enslaved worker, Anthony Bryant, stayed on the Illinois farm year-round, acting as overseer, acquiring his freedom this way. In 1847 his wife Jane and four of her children were among those brought to work on Matson's Illinois farm. When Bryant heard rumors of the intended sale of his wife and family on their return to Kentucky, the family fled Matson's farm in the middle of the night. They sheltered at Gideon Ashmore's hotel with Ashmore and Dr. Hiram Rutherford's connivance. When Matson returned to Illinois, he demanded that Rutherford and Ashmore release the family. Instead the Justice of the Peace ordered the wife and children be removed to the jail in Charleston in accordance with the law. Ashmore then applied to the Circuit Court for the release of the family on a writ of Habeas Corpus.

Matson retaliated, filing a suit in Circuit Court against Ashmore and Rutherford, asking for $2500 from them for having taken his human "property" and causing him damages. Matson claimed that the family were not Illinois residents and therefore not entitled to their freedom. Rutherford and Ashmore argued that the African Americans were not property of Matson, since the Illinois Constitution of 1818 declared slavery illegal. When the trial was scheduled in Charleston, Matson hired Usher Linder and Abraham Lincoln to represent him. Rutherford had asked his friend Lincoln to consider representing him instead of Matson, but Lincoln refused the offer saying that he was already committed to Matson. Rutherford and Ashmore then employed Charles Constable and Orlando Ficklin.

The crucial question in the case was whether the Bryant family was held in transit while crossing Illinois or whether they were held in the state by Matson. The case was settled in October 1847 in favor of the Bryants. Well-wishers provided the Bryants passage to Africa. In 1848 an American church elder found them in Monrovia, Liberia. They begged him to pay their passage back to escape untenable conditions in Africa but he could not oblige.

The Dr. Hiram Rutherford House is located at Pike St. and Illinois Route 133, Oakland, Illinois. It is part of the Oakland Historic Landmarks compound. Landmarks sites are open 10 am-2 pm, Fridays and Saturdays, from April 1 through Oct. 31. Tours at other times are available by appointment by calling (217) 948-5629 or sending an e-mail to info@drhiramrutherford.