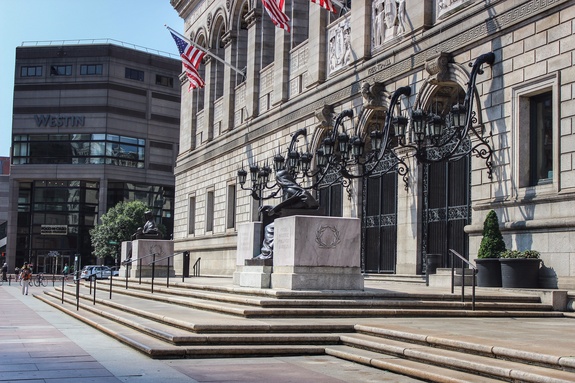 Established in 1848, by an act of the Great and General Court of Massachusetts, the Boston Public Library (BPL) was the first large free municipal library in the United States. The Boston Public Library's first building of its own was a former schoolhouse located on Mason Street that was opened to the public on March 20, 1854.

In December of that same year, the library's Commissioners were authorized to locate a new building upon a lot on Boylston Street. The present Copley Square location has been home to the library since 1895, when architect Charles Follen McKim completed his "palace for the people."

In 1986, the National Park Service designated the McKim Building a National Historic Landmark citing it as “the first outstanding example of Renaissance Beaux-Arts Classicism in America.” Within the McKim Building are fine murals series, fine collections of rare books and manuscripts, maps, and prints, and splendid gallery space for displaying the numerous treasures assembled over the past 160 years. Amenities include a restaurant and café, a peaceful inner courtyard, several comfortable and wifi accessible inviting reading areas.

Within its collection of 23 million items, the library boasts a wealth of rare books and manuscripts, maps, musical scores and prints. Among its large collections, the BPL holds several first edition folios by William Shakespeare, original music scores from Mozart to Prokofiev's "Peter and the Wolf;" and, in its rare book collection, the personal library of John Adams. Throughout the year, the Boston Public Library hosts exhibitions that offer the public an opportunity to view books and documents usually available only to research scholars.

Among the better-known treasures of the Central Library in Copley Square are:

Acknowledged by many to be architecturally one of the most important rooms in the world, Bates Hall features a majestic barrel-arched ceiling enclosed by half domes on each end, English oak bookcases, busts of eminent authors and Bostonians, and a richly carved limestone balcony. The hall, located on the second floor of the McKim building, is named in honor of Joshua Bates, a London merchant banker born in Weymouth, MA, who in 1852 gave the Boston Public Library $50,000 for the purchase of books.

Murals titled the "Quest of the Holy Grail," by American artist, Edwin Austin Abbey, grace the walls of the Abbey Room on the second floor of the McKim building. The murals are composed of a series of 15 panels featuring 150 life-sized figures illustrating the Arthurian legend. The room also features a beautiful fireplace of French rouge antique marble, dark oak wainscoting, and a beamed ceiling modeled after one in the library of the Doge's Palace in Venice.

Located on the 3rd floor are spectacular murals painted by John Singer Sargent. The theme of this unusual series is the development of world religions. Sargent considered this effort to be his most important work. Distinctly different from his well-known portraits of distinguished Americans and Europeans and his delicate landscapes, Sargent painted in the style of Italian Renaissance frescos by incorporating the architectural detail of the building into the work.

The library offers tours highlighting the architecture of Charles Follen McKim and Philip Johnson, as well as the many works of famed sculptors and painters. The tours last about an hour and are given by volunteer guides. For a list of currently scheduled tours click here.