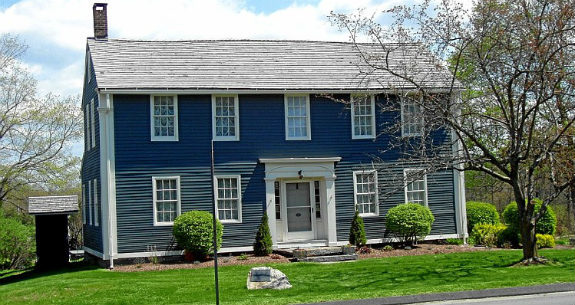 According to the William Williams House page in Wikipedia:

The Williams house is a 2-1/2 story wood frame structure, five bays wide and two deep, with a side gable roof, twin interior chimneys, and clapboard siding. Its main entrance, centered on the front facade has a Greek Revival surround, with sidelight windows and pilasters flanking the door, topped by a cornice with a carved elliptical arch. A single-story ell extends to the rear of the house. The interior follows a center hall plan, and retains original features, including fireplace mantels (although most of the fireplaces have been closed up), and wide pine flooring.

The house's construction date and original owner are not known. It was purchased in 1748 by Reverend Solomon Williams, who gave it to his son William in 1755. William (born 1731) was trained at Harvard College, and saw provincial militia duty in the French and Indian War in 1755. He settled in Lebanon that year, and embarked on career as a merchant, jurist, and politician. He served in the provincial assembly 1757-76 and the state legislature 1781-84. He was a steadfast supporter of independence during the American Revolution, working closely with his father-in-law, Lebanon native and Governor of Connecticut Jonathan Trumbull. Williams personally funded Connecticut militia that captured Fort Ticonderoga in 1775. He was elected to the Second Continental Congress, where he signed the United States Declaration of Independence and the Articles of Confederation. He was a delegate to the 1788 state convention that ratified the United States Constitution.

The house was declared a National Historic Landmark and listed on the National Register of Historic Places in 1971.