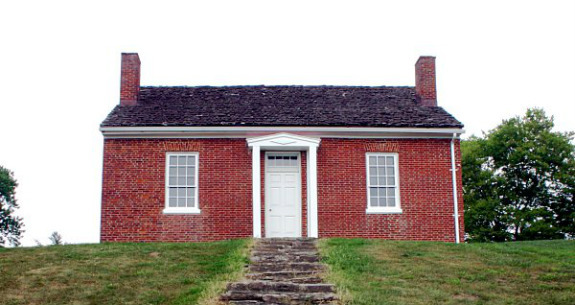 Photo by Rdikeman / CC BY

The Rankin House is a National Historic Landmark and Underground Railroad Station. The Rankin House, located on Liberty Hill which overlooks the Ohio River and Ripley, is one of the better known sites which assisted in the Underground Railroad efforts. Built in 1828. This state memorial commands one of the most beautiful views on the Ohio River. Seven bends may be seen on a clear day. The home contains much of the original woodwork and several personal Rankin items, including the family Bible.

One hundred steps led from Ripley to the house on the hill; these steps are accessible today. Rankin said: "My house has been the door of freedom to many human beings, but while there was a hazard of life and property, there was much happiness in giving safety to the trembling fugitives. They were all children of God by creation and some of them I believe were redeemed by the blood of the Lamb." Rankin's first home was located at 220 Front Street.

Rev. John Rankin was born in Tennessee in 1793. In 1822, after preaching for several years in Kentucky, Rankin and his wife Jean moved his growing family across the Ohio River to Ripley in the free state of Ohio. In 1822, he began his 44 year ministry of Ripley's Presbyterian church. In 1825, he built the house on Liberty Hill overlooking the river.

With its proximity to the river and its owner's fierce opposition to slavery, the Rankin home was a perfect choice to become a stopping point on the Underground Railroad. The Rankin family (which included 13 children) was proud of never having lost a "passenger". Most of the 2,000 escaped slaves who traveled through Ripley stayed with the Rankins.

Upon learning one of his brothers in Virginia had acquired a slave, Rankin wrote a series of letters denouncing slavery to the editor of the local paper, later published as the book Letters on American Slavery in 1826. Rankin also helped organize the Ripley Anti-Slavery Society, Rankin taught, preached, wrote and traveled to inform many people of the evils of and the need to abolish slavery.

The Rankins' work inspired others to rally to the cause. Well-known abolitionist Wm. Lloyd Garrison called himself a Rankin disciple. Harriet Beecher Stowe heard Rankin's account of a slave who carried her child across the thawing ice of the Ohio River and was saved from the bounty hunters that chased her when the ice broke up. Stowe later included the story in her novel Uncle Tom's Cabin. Six of Rankin's sons and one grandson fought in the Civil War, all survived.

More about the John Rankin House at Historic Ripley, Ohio.