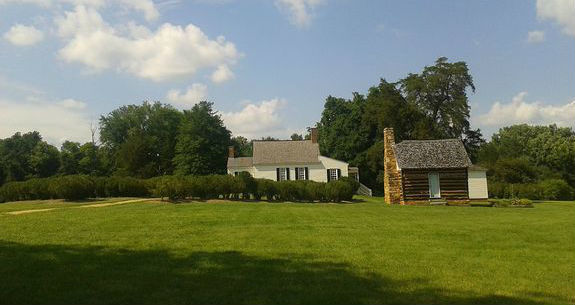 Red Hill (the plantation) was first owned by 11 men who were granted 30,000 acres of land “ beginning at the mouth of Falling River on the North fork of the Roanoke River in Brunswick County from thence on both sides of the River for Compliment in one or more surveys.”

Richard Marot Booker inherited the land (700 acres) in 1772, but Louis Tyler was living in the house at that time, according to Powhatan Bouldin who wrote “ An Old Trunk.” At that time, Richard Marot Booker was listed as a resident of Halifax County, probably living at “ Seven Islands,” directly across the river from Red Hill. During 1772, Richard Marot’s name begins appearing on Charlotte County records, so it is assumed that he moved to Red Hill sometime that year, while Louis Tyler moved further downstream. Later, Tyler would die during the Revolution, and Booker would buy his land.

Richard Marot Booker speculated in land, and by 1789 was heavily in debt. He began selling off property, and in March of 1794 Patrick Henry purchased the 700-acre tract from him. He then began adding to the parcel, including the Tyler land, eventually owning 2,930 acres in Campbell and Charlotte Counties. Henry also purchased Booker’s “ Seven Islands” plantation in Halifax County.

When Patrick Henry died, the Red Hill house and half the plantation went to his two sons John Henry and Edward Winston Henry. The two moved back to Red Hill in 1815. Edward Winston married in 1817, after which he and his wife resided at Red Hill for a time. John Henry then married in 1826 and brought his new wife Elvira McClelland to Red Hill, where the couples both lived. During the time they were all living there, Edward and his wife had seven children and John and Elvira had three. This family growth began to cramp the space of the two families, and, feeling the need for more living space, they divided the property in 1832.

It was John and Elvira who then added the first two-story addition to the house and began beautifying the grounds. The gardens were Elvira’s project—she built an orangery to plant orange and lemon trees, planted a D-shaped boxwood garden in the pattern of her grandmother’s, and brought many exotic plants and shrubs to be planted on the grounds. She was so enthusiastic in her landscaping that one of John’s older siblings had cause to complain that “ that young wife of John is ruining Red Hill.” When John Henry died in 1868, he left the estate to his wife and children, and Elvira remained there until her own death in 1875.