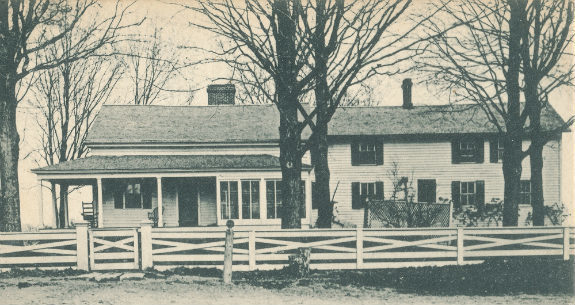 Owen Lovejoy (1811-1864), an influential abolitionist, lived in this house, a National Historic Landmark, which was used as a depot on the Underground Railroad.

Born in Maine, Lovejoy moved to Princeton in 1838 where he was a minister for a Congregationalist Church. Only one year before, Lovejoy had witnessed the shooting death of his brother Elijah, an abolitionist newspaper publisher, by an angry proslavery mob in Alton, Illinois. Even more committed to the cause after his brother's death, Lovejoy used the pulpit to further the abolitionist cause and believed that slavery could be abolished through political action.

After two unsuccessful attempts at running for the U.S. House of Representatives in the 1840s, Lovejoy was elected to the House in 1856 where he gained a reputation for his fiery antislavery speeches. During the 1840s and 1850s, Lovejoy also used his home to harbor slaves on their way north and faced prosecution several times. It was widely known in Illinois that Lovejoy was "in charge" at Princeton and that fugitives passing through Princeton from slavery to freedom were riding the "Lovejoy Line." He was quite proud of his opportunities to help slaves flee to freedom and admitted this publicly, not as a boast, but to defy the supporters of slavery.

In an 1859 speech in Congress that drew national attention, Lovejoy addressed his role in the Underground Railroad directly with, "Owen Lovejoy...aids every fugitive that comes to his door and asks it. Proclaim it then from the housetops. Write it on every leaf that trembles in the forest, make it blaze from the sun at high noon...I bid you defiance in the name of my God!"