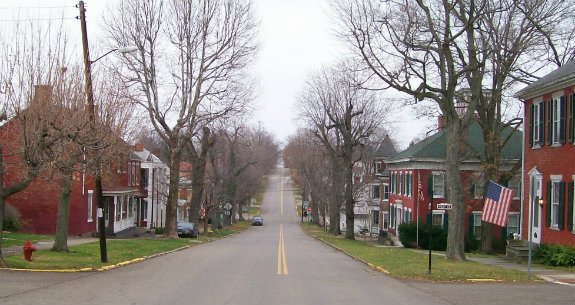 The town of Mount Pleasant was established in 1803 by Robert Carothers, an Irishman from Virginia, and Jesse Thomas, a Quaker from North Carolina. Some or all of the village center is designated as Mount Pleasant Historic District, a U.S. National Historic Landmark District. The district includes the Friends Meetinghouse (Mount Pleasant, Ohio) built by the Quakers in 1814 to house the first yearly meeting established west of the Alleghenies.

It is important for the role it played in the antislavery movement and the Underground Railroad. Incorporated in 1814, the town became a center for pork packing and shipping and was also successful in the milling industry. The strong Quaker population in Mount Pleasant preached and practiced its abolitionist views and published antislavery literature, such as Benjamin Lundy's "Genius of Universal Emancipation." A station on the Underground Railroad, the town was a refuge for fugitive slaves and a welcome home for free blacks. Local residents built and administered a school for free black children, and in 1848 established a Free Labor Store which sold no products produced by slave labor.

The district was listed on the National Register of Historic Districts in 1974 and was designated a National Historic Landmark in 2005.