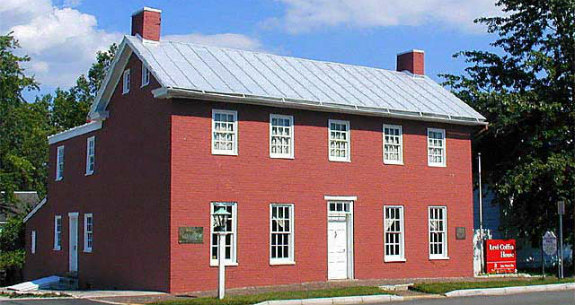 This eight-room home was the third home of Levi and Catharine Coffin in Newport, and it was a safe haven for hundreds of fugitive slaves on their journey to Canada. Levi and Catharine Coffin’s home became known as “The Grand Central Station of the Underground Railroad.” The Coffins and others who worked on this special “railroad” were defying federal laws of the time.

From the outside it looks like a normal, beautifully-restored, Federal-style brick home built in 1839. Being a Quaker home, the Coffin house would not have had many of the era’s decorative features such as narrow columns, delicate beading or dentil trim. On the inside, however, it has some unusual features that served an important purpose in American history. Most rooms in the home have at least two ways out, there is a spring-fed well in the basement for easy access to water, plenty of room upstairs allowed for extra visitors, and large attic and storage garrets on the side of the rear room made for convenient hiding places. The location of the house, on Highway 27 at the center of an abolitionist Quaker community, allowed the entire community to act as lookouts for the Coffins and give them plenty of warning when bounty hunters came into town.

For their journey north, freedom-seekers often used three main routes to cross from slavery to freedom — through Madison or Jeffersonville in Indiana, or Cincinnati, OH. From these points, slaves traveled to Newport through the Underground Railroad. The Coffins’ “station” was so successful that every slave who passed through eventually reached freedom.

The Levi Coffin Home is a National Historic Landmark and is operated by the Levi Coffin House Association. It has been named as one of the top 25 historic sites in the nation to visit. The house contains many original furniture pieces from the Newport community and the Coffin family.

Levi and Catharine Coffin were Quakers from North Carolina who opposed slavery and became very active with the Underground Railroad in Indiana. During the 20 years they lived in Newport (now Fountain City), they worked to provide transportation, shelter, food and clothing for hundreds of freedom seekers. Many of their stories are told in Levi Coffin’s 1876 memoir, Reminiscences.

As a child in the south, Levi witnessed the cruelty of slavery and, later with his wife Catharine, “did not feel bound to respect human laws that came in direct contact with the law of God.” While many Quakers did not believe in slavery, few were active abolitionists and even fewer risked their lives and freedom to actively help slaves escape bondage. Others in the Newport community who were unwilling to directly help freedom seekers provided the Coffins with money, extra food, clothing and protection for their work.

Levi was a well-respected community leader with several business interests in Newport. Instead of hiding his work, he jokingly boasted about being the “President of the Underground Railroad” and publically spoke out against slavery. He often used the law to his advantage and was friends with Henry Ward Beecher and Frederick Douglass. Catharine was also deeply committed to the cause. She organized sewing circles that made new clothing for freedom seekers and ensured their safety and comfort in their home.

In 1847, the Coffins moved to Cincinnati so Levi could operate a wholesale warehouse supplying goods to free-labor stores. The Coffins continued to assist fugitives on their escape to freedom.

Levi continued to help African Americans right up until his death. He spent his last years campaigning for donations to help fund food, clothing and educational supplies for the newly-freed slaves dumped into refugee camps after the war.

During the month of May, it is recommended calling ahead before visiting the site Tuesday through Friday. We are expecting high visitation from area schools and cannot handle public tours until the afternoon hours. To check on availability, please contact us at 765.847.1691.