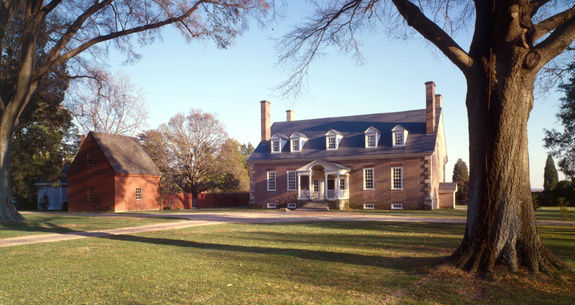 Gunston Hall (1755-1759) is the architectural gem built for George Mason IV by William Buckland and William Bernard Sears. The mansion stands as a testament to a single architectural moment in colonial Virginia. After its completion in 1759, few changes were made. As a result, Gunston Hall remains as a vital example of the Georgian style washed upon Virginia's shores. The two English craftsmen, Buckland and Sears, brought with them the styles popularized in London with Sears's skill in carving and Buckland's designs derived in part from source books. They produced eclectic interiors that illustrated the full spectrum of the English Rococo including a Central Passage with “French Modern” and Neoclassical elements, a porch in the “Gothik” style, and two public rooms-one in the “Chinese Taste” and the other containing elements of Palladianism. These two men also produced the furniture for the “Chinese” Room-a rare feature for the period. In addition to importing talent from England, Mason also purchased English furnishings for use in the mansion. The sheer number of Mason pieces provides a vivid picture of what Gunston Hall looked like when the family lived there from 1759 to 1792.

Though George Mason IV built Gunston Hall as the “family seat” designed to remain in family hands in perpetuity, this was not to be the case. After his death in 1792, the mansion passed in quick succession to his son, George Mason V, who died in 1796, and then to his grandson, George Mason VI. Upon his death in 1834, his second wife Eleanor Clifton Patton Mason inherited the residence. She and George Mason Graham, who owned part of the property, sold Gunston Hall by 1867 to William Merrill and William Dawson. They in turn deeded the property to Edward Daniels in 1868. During the 1880s, the house was leased to Frank and S. M. Smith, who boarded local residents during the summer. Emma and Joseph Specht purchased the house in 1891 from Edward Daniels. The Specht's daughter Adelaide sold the house to Paul and Vaughn Kester in 1907. After his brother's death, Paul Kester sold the house to Louis Hertle in December, 1912. The Hertles were the last private owners of Gunston Hall before its gift to the Commonwealth of Virginia in 1949 to be administered by Regents from The National Society of The Colonial Dames of America.

Source:
Read more about the history of George Mason's Gunston Hall at their website.