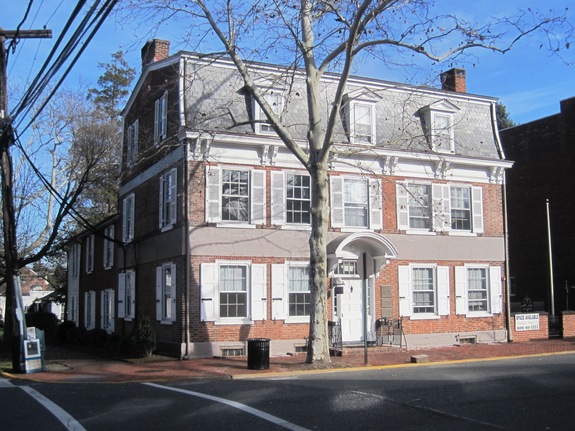 The Hopkinson House was built in 1750 by John Imlay, a merchant. The structure is an L-shaped two-and-one-half-story brick structure with a gambrel and dormered roof. The main house, which faces west, is about 41 feet or five-bays wide and 30 feet deep. A two-story brick wing, 30 by 16 feet, extends to the rear from the northeast corner of the main house. A two-story frame wing, 15 by 22 feet and containing kitchen and servant's bedroom, is attached to the east or rear end of the brick arm.

The center door in the main house is sheltered by a segmental hood, and the door is topped by a rectangular transom and flanked by sidelights, The door opens into a center hall that extends through the house from front to rear. The hall is divided into two sections by means of wide folding doors that are topped by an arched fanlight. The front portion serves as an entrance hall, and the rear section as the stair hall, with the stairs set against the right or south wall. To the left of the hall is a large (24 by 15 foot) living room and to the right there is a library, 22 by 15 feet in size. The walls are plastered and the floors have 11-inch wide boards; the mantels appear to date at least from the early 19th century. These two rooms and hall are now utilized by the Bordentown Chamber of Commerce as an office and museum and are open to visitors. A narrow hall extends from the central stair hall south across the rear or east side of the main house. The first floor of the rear brick wing contains the dining room and the second floor two bedrooms. This wing now forms an apartment unit. The second and third floors of the main house each have four bedrooms. These make up a second apartment unit. Neither apartment is open to visitors.

The exterior of the house, except for a metal roof, appears to be little-altered. The interior, however, appears to have undergone considerable alteration in details such as replacing woodwork and trim. The basic floor plan of the house, however, has not been greatly changed. The structure is in excellent condition.