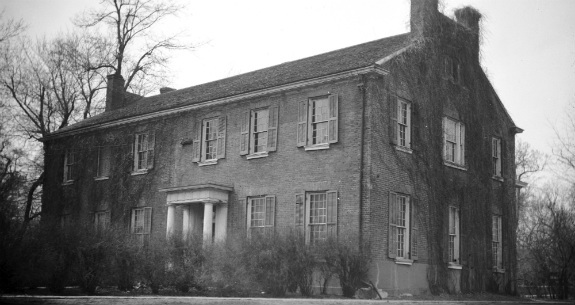 Illinois College, founded in 1829, was one of the first institutions of higher learning chartered in Illinois. Before the Civil War, Illinois College was a center for the antislavery movement in the state. Beecher Hall, the original building of Illinois College, is the oldest college building in the state. Construction of the south half, the original portion of the present two-story brick structure, began in the summer of 1829 and was completed in 1830. The design of the multipurpose building suggests the Late Georgian style of New England. It was named for the college's first president, Dr. Edward Beecher, brother of the abolitionist preacher Henry Ward Beecher and the author of Uncle Tom's Cabin, Harriet Beecher Stowe.

Illinois College had close ties with the abolitionist movement and the Underground Railroad from its inception. Its classrooms and residential quarters provided safe places to deplore slavery, strategize means for ending slavery, and to assist freedom seekers passing through Jacksonville. The college was founded by local trustees and seven graduates of the Yale Theological Department - all opposed to slavery. Its first college president Beecher and two college trustees helped found the Illinois Antislavery Society in 1837. Many of the early settlers in the surrounding area, however, had come from the Border States and were pro-slavery. Newspapers of nearby cities wrote scathing attacks on the college and its staff. Despite this hostile environment's effect on enrollment and funds, the college staff and many of the students they influenced upheld antislavery principles. A few went as far as assisting freedom seekers on the Underground Railroad. Some were arrested, and all suffered threats and harassment. Professor Jonathan Baldwin Turner, publisher of the abolitionist newspaper The Illinois Statesman, helped guide three fleeing African American women to safe haven enabling them to eventually reach freedom in Canada. Samuel Willard, an Illinois College student, was prosecuted and fined for attempting to free an escaping bondsman. Elijah Lovejoy, the editor of the first abolitionist newspaper in Illinois, was a friend of President Beecher and visited campus. After the murder of Elijah Lovejoy at the hands of an angry mob in 1837, students held a protest on campus. One student speaker was William Herndon, later Lincolnâ€™s law partner for twenty years. Not happy with abolitionist influences, Herndonâ€™s father forced him to withdraw from the college.

Beecher Hall, Illinois College, is located at 1101 W. College Avenue, Jacksonville, Illinois. The campus is free and open to visitors during operating hours, when the college is not on vacation. Tours are available. For college information, call (21)245-3000. Turner Junior High School, just south of the campus, has elaborate guided tours of the historic area including the college, and brochures featuring the college as an Underground Railroad site are published by the Visitors' Bureau of the Jacksonville Area Chamber of Commerce.

For more about Beecher Hall at National Park Service