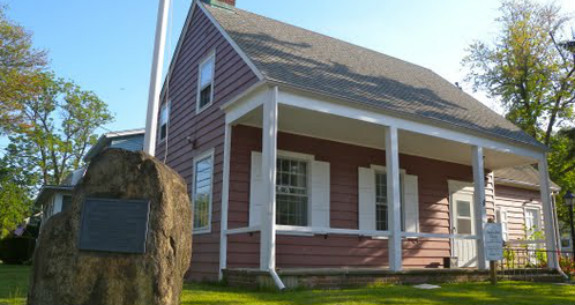 This house is a replica of the of the home of Abraham Clark (February 15, 1726 - September 15, 1794), a signer of the Declaration of Independence. The original house, which stood a block away on Crane Street, was destroyed in 1900 by a fire. This replica house was built in 1941.

As a delegate to the Continental Congress in 1776, Abraham Clark was one of five delegates who signed the Declaration of Independence representing New Jersey. The other four were:
•  John Hart, whose house and gravesite are in Hopewell.
•  Francis Hopkinson, whose house is in Bordentown.
•  Richard Stockton, whose home, Morven and his gravesite are both in Princeton.
•  John Witherspoon, who lived at the Maclean House in Princeton, and is buried at the Princeton Cemetery.

On the morning of July 4, 1776, before the meeting of the Continental Congress that would officially adopt the Declaration of Independence, Abraham Clark expressed his thoughts in a letter to his friend Colonel Elias Dayton:

"Our Congress Resolved to Declare the United Colonies Free and independent States. A Declaration for this Purpose, I expect, will this day pass Congress, it is nearly gone through, after which it will be Proclaimed with all the State & Solemnity Circumstances will admit. It is gone so far that we must now be a free independent State, or a Conquered Country."
(Clark's capitalization has been left uncorrected. The emphasis on Free and Independent States is from the original. It has not been added.)

The following day, Clark sent a copy of the completed Declaration of Independence to William Livingston, who was then a Brigadier General of the New Jersey Militia, and he would soon become the first elected Governor of New Jersey. Clark's letter to Livingston stated:

"I enclose a Declaration of Congress, which is directed to be Published in all the Colonies, And Armies, and which I make no doubt you will Publish in your Brigade." (Clark's capitalization has been left uncorrected.)

Abraham Clark continued to serve in the Continental Congress from 1776-1778, and then again in 1780-1783 and 1786-1788. He later served in the United States House of Representatives in the Second and Third Congresses (during the presidency of George Washington) from March 4, 1791, until his death on September 15, 1794.

Abraham Clark is buried at the Rahway Cemetery in nearby Rahway, along with his wife Sarah and three of their sons who fought in the Revolutionary War, Aaron, Andrew and Thomas. Roselle's Abraham Clark High School, which is located several blocks from here, is named in his honor. The nearby Clark Township is also named for him.