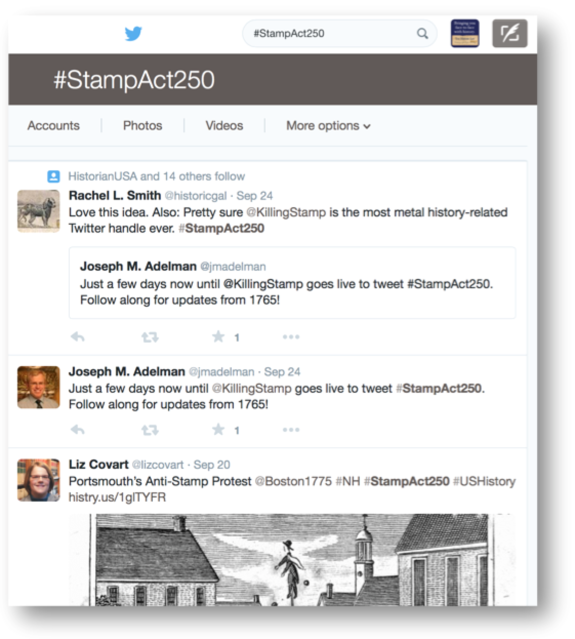 Using hashtags to promote your event will raise awareness in advance, encourage attendance, and enable those who are there to track the event and those who aren't able to attend to follow along.

To attract people to your event who may not be familiar with your event or your organization, use a hashtag that they might use to find events of interest to them, such as the topic, type of event, or location.

You can search for hashtags within Twitter and on Google, and within some of the other social services. (See the list of several social services that support hashtags below.) There are also free tools, such as Hashtagify, HashAtIt, hshtags, and others, as well as tools with a monthly fee, that help you research and analyze hashtags.

This example is from a search on Twitter and shows the hashtag that was popular for events, programs, and posts connected to the 250th anniversary of the Stamp Act: #StampAct250.

Raising awareness of your event with a unique event hashtag

To reinforce awareness of your own event, choose a hashtag for your event that's short and that, ideally, makes it easy for someone to connect it back to your organization. One of the frustrating things about hashtags is that it's often not easy to figure out the event behind a hashtag without doing a web search.  Embedding your organization's name or the topic of the event helps convey some information without a search.

These screenshots from Twitter show the way that the New England Museum Association (NEMA) promoted and used a hashtag for their 2013 conference.  As you can see, they included it in their conference program (top), as well as other communications.  Attendees included it in their tweets; a search on #nema2013 on Twitter returns all of the tweets that included that hashtag. 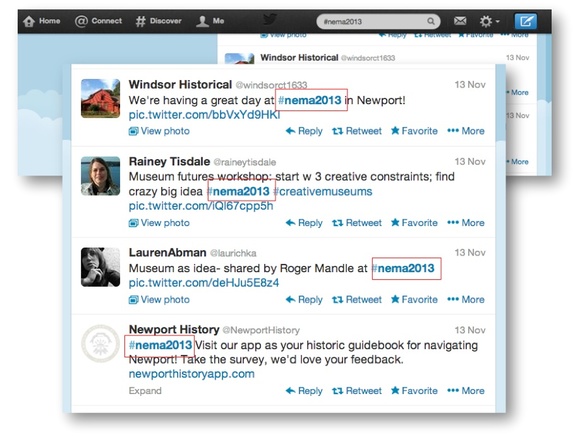 The last screenshot shows the hashtag on the event page on The History List. We've added a box to the "Add event" form where you simply type it in.

In addition to Twitter, hashtags can be used in . . .

Here's one attendee's reaction to using Twitter and a conference hashtag extensively: 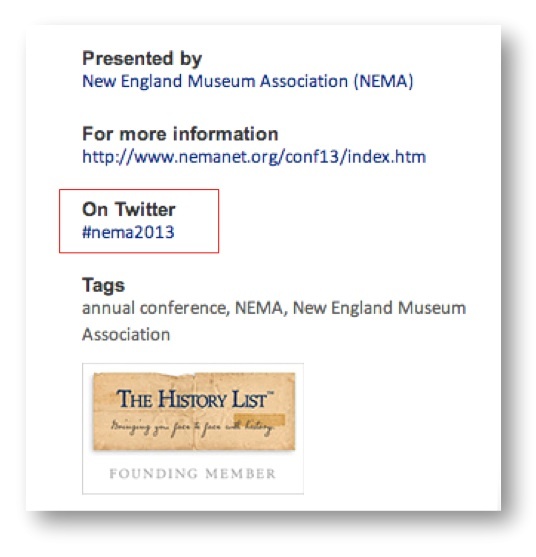 This was the first conference I have devoted any real time to Twitter. The #nema2013 hashtag was lively without being overwhelmingly busy. I am sure that tweeting can be a distraction for some, but for me it’s no more distracting than taking notes (in which I sometimes go on tangents in the margins about something at school or work related to the presentation topic). I was using Twitter to connect with colleagues, but I was surprised to find that tweeting about sessions can be a very useful thought exercise. In coming up with concise restatements of a session’s biggest takeaways as it was going on, I was synthesizing and sorting information on a level and speed I rarely do. #youlearnsomethingneweveryday