Rogers’ Rangers and the French and Indian War 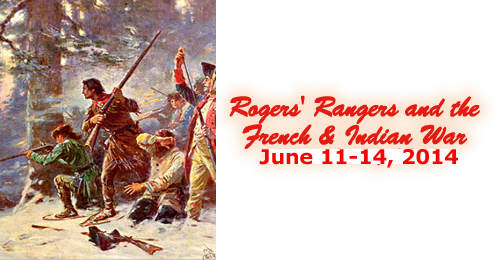 The story of Major Robert Rogers and his Rangers is familiar to those who’ve read Kenneth Roberts’ fast-paced novel Northwest Passage or saw it brought to the silver screen in 1940, starring Spencer Tracy. The riveting tale of Fort William Henry’s siege and massacre after Monro’s surrender to Montcalm is integral to James Fenimore Cooper’s classic novel Last of the Mohicans which made for several movie adaptations. But the real history of Rogers, his Rangers and the forts built along the Lake George/Lake Champlain/Upper Hudson River water corridor is even more fascinating, when all the facts are told. The Adirondack area itself provides a truly majestic backdrop for one of the bloodiest periods of America’s history. It was a crucial time as two European superpowers struggled for supremacy over territory, trade and the natural riches of North America.

Robert Rogers is a truly enigmatic figure whose “Rules of Ranging” is still studied today by elite units of our armed forces. In addition, other characters emerge from the fighting around Lake George; men such as John Stark, Israel Putnam, Paul Revere and Thomas Gage who, like Rogers, all will play supporting roles in the American Revolution twenty years later.

We will begin our tour in 1755 with the three-phased battle of Lake George, a fight that made Sir William Johnson famous and changed the name of the lake forever. We will visit the sites of Bloody Morning Scout, the main battlefield at Lake George and the little seen Bloody Pond site. It was after this battle that Johnson was introduced to Robert Rogers as a frontiersman who could provide needed intelligence for his army. Next we’ll drive to Rogers’ Island on the Hudson River, which served as the Rangers’ base camp from 1756 to 1759. The visitor’s center here offers some unique books on local history. Lunch will be at a historic restaurant in the area. After lunch we will briefly visit the sparse remains of Fort Edward, then follow Rogers’ route to the battle at Halfway Creek near Fort Ann. In the afternoon we will explore reconstructed Fort William Henry to discuss the Marquis de Montcalm’s siege of 1757 and the subsequent massacre of British and colonial forces after the surrender of the fort. Ranger Captain John Stark helped fight off a French attack on the fort in March 1757 and Rogers’ brother lost his life there.

On the second day we will follow British General James Abercrombie’s ill-fated 15,000 man flotilla as we drive up the west side of Lake George, stopping at Sabbath Day Point where both Abercrombie and Amherst stopped during their campaigns. At this point you’ll be able to see Rogers’ famous “Secret Passage” between Lake George and Lake Champlain. Our next stop will be the site of Rogers’ famous Battle on Snow Shoes. We will also be able to view the legendary “Rogers’ Slide” which helped enhance Rogers’ reputation, even during his own lifetime. Next we will visit the controversial spot where the most beloved man in the British army, Lord George Viscount Howe, met his fate. After lunch we’ll visit Mount Defiance with its panoramic view shed of the reconstructed Fort Carillon (Ticonderoga). Here, Rogers and his Rangers conducted reconnaissance as the French built their fort on a promontory overlooking Lake Champlain. Time will be allotted for you to explore the fort. We will also stop at the French Lines where Montcalm successfully defended the fort in 1758, walking the length of the earthworks to see the site where the famed 42nd Highlanders, the “Black Watch” made their forlorn attack on the works. The Rangers were involved in this battle; there are many stories associated with the Rogers and Fort Ticonderoga. We will also see Sir Jeffery Amherst’s siege lines that were never needed in 1759. We will return to the hotel via a route that will allow you to see South Bay on Lake Champlain where Baron Dieskau originally landed his troops for his attack on Johnson’s army in 1755. Weather permitting we have a special surprise planned for Friday evening.

On our final day, we will travel to Crown Point. On the way we will visit the site of Rogers’ First Battle on Snowshoes where he had his first close brush with death. Next we will stop at the ruins of the French Fort St. Frederic and the British fort at Crown Point on Lake Champlain. The latter fort, constructed by Amherst, was the largest fortification ever built during the conflict. We will end our third day with another very special surprise before returning down Lake George to the hotel.

Our headquarters hotel will be the historic Queensbury Hotel which has some classic art work in the lobby relating to James Fenimore Cooper’s novel The Last of the Mohicans. We think you’ll enjoy this facility.

Our Tour Leaders: Dr. John Grenier is an award-winning author of two books related to the 18th century: The First Way of War: American War Making on the Frontier, 1607-1814 and The Far Reaches of Empire: War in Nova Scotia, 1710-1760. He received a Ph.D. in history from the University of Colorado where he studied under Fred Anderson. He is currently working on a biography of Robert Rogers. Dr. Bruce M. Venter is president of America’s History, LLC, a native of upstate New York, an experienced 18th century Colonial history tour leader and has lectured at Fort Ticonderoga. The site of his summer home on Lake George saw the canoes and bateaux of the French, English and Native Americans pass by it two and a half centuries ago.

What’s included: motor coach transportation, three lunches, beverage and snack breaks, a map and materials package, all admissions and gratuities, and the services of two experienced tour leaders. Tour participants are responsible for transportation to the headquarters hotel, and securing a room reservation, if necessary. Dinner is on your own. Tour goes out rain or shine. Please see our policy page for information about cancellations.
Added Benefit: America’s History will provide you with pick up and drop off at the Albany International Airport, if you are flying in for this tour.

Hotel: We have arranged with the headquarters hotel for a group rate of $114.00 per night plus tax (double or single occupancy.) Please call the Queensbury Hotel, 88 Ridge Street, Queensbury, NY at 518-792-1121 and ask for the America’s History group rate. This rate will be guaranteed until May 11, so please make your reservations soon.