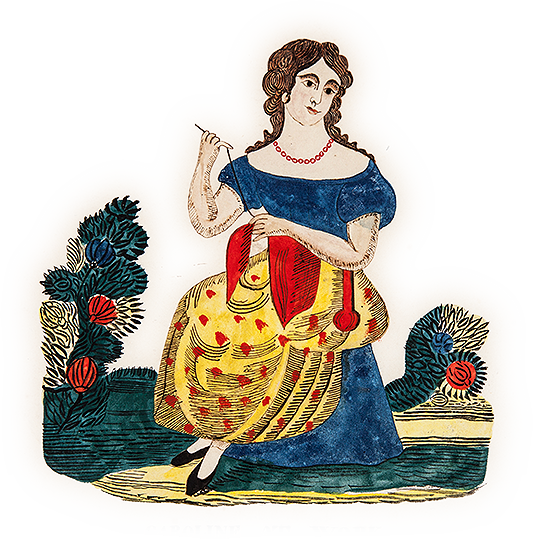 The PENN DRY GOODS MARKETis an amazing opportunity to learn from noted experts in textile history. In 2015 we will be offering a superb roster of speakers on a potpourri of topics, ranging from Baltimore Album Quilts, Gothic Clothing, and Berlin Wool Embroidery to the costumes of The Wizard of Oz. Register early as seating is limited.

Paying with Credit Card online? Click the Register button below your desired program to pay online by credit card through PayPal.

Berlin needlework – for some, a phrase that is enough to wrinkle the nose in distaste. The significance of Berlin work, however, to American needlework traditions cannot be ignored any longer. Join Schwenkfelder Library & Heritage Center curator Candace Perry as she wades through the “morass of Berlin wool embroidery” on a journey to better understanding of the impact of the mass produced patterns and vibrant wool yarns in the evolution of Pennsylvania Germans needlework, and why it is time to reassess the work with objective eyes. From dye to design, it’s a Berlin work extravaganza!

The charm, imagination, and individuality expressed in Romantic era costume (1810-1860) is the subject of textile historian Lynne Bassett’s lecture. Lynne has been working for several years on this fascinating subject, exploring how costume of this period – like the art, music, literature, and architecture –expressed a new vision that recalled the past. Lynne will also bring her listeners up to date with a discussion of the descendants of the Romantic era, the Goth and Steampunk movements of the 21st century. Lynne Z. Bassett is an award-winning curator, historian and author who specializes in costume and textile collections. Her exhibition Gothic to Goth: Romantic Era Fashion and Its Legacy opens at the Wadsworth Atheneum in Hartford, CT in February 2016.

Like many Virginia slave-owners in the 18th century, George Washington ran a weave shed on his property that produced most of the textiles used to keep his enslaved workers clothed, from linen and wool grown on the plantation or purchased locally. By the beginning of the Civil War, however, most American slaves were clothed with factory-produced cloth, imported from Northern mills, English mills, or made in the small Southern mills growing up throughout the slave states. This talk explores the complicity of northern capitalism in southern slavery, the changes in the production of slave cloth and how slaves were clothed in the antebellum era, how clothing reinforced racial stereotypes, and how enslaved workers fought back against the smothering of individual identity.

Madelyn Shaw is an independent curator specializing in the exploration of American history and culture through textiles and dress. She has held curatorial and administrative positions at the New Bedford Whaling Museum; the Museum of Art, Rhode Island School of Design; The Textile Museum (Washington, DC); and the Museum at FIT (New York). She is lead author and co-curator (with Lynne Bassett) of the award-winning Civil War sesquicentennial book and traveling exhibition titled Homefront & Battlefield: Quilts & Context in the Civil War.
$25.00

Kristina Haugland
A Brief History of Ladies' Undergarments
Board Room

What lies underneath the complex costumes of generations past, and what factors contributed to the changes? Kristina Haugland, Associate Curator of Costume and Textiles at the Philadelphia Museum of Art will present a fascinating glimpse of those unmentionables in her lecture on the history of feminine undergarments. From the structured silhouettes of past centuries to the increasing brevity of 20th and 21th century underpinnings, Kristina will lead her audience on a tour of lingerie drawers, past and present, in this highly informative and wonderfully illustrated lecture.

What makes a sampler great? Join Amy Finkel, principal of M. Finkel & Daughter in Philadelphia, for an introduction to conoisseurship of samplers and needlework. It’s a must-see for anyone embarking on, or building, a needlework collection. Amy will present a extensively illustrated lecture on the good, better, and best based on her nearly 40 years of experience as both a dealer and a scholar of antique needlework. Get ready to take notes!

Join Mary Brooks, archivist for the Westtown School, for an illuminating discussion of the samplers produced by girls attending the school. The Westtown School was significant in its continuation of the tradition of English Quaker sampler making associated with the earlier Ackworth and York schools in England. Westtown, which opened in its doors in 1799, offered sewing as a part of its standard curriculum. The large number of surviving samplers – and the more rare embroidered globes – are evidence of the emphasis and importance placed on this instruction by the school. The Westtown School has 130 samplers and nine globes in its collection, and many other examples exist in other private and public collections. Don’t miss the excellent program that is a necessity for anyone interested in the history of American sampler making and the important Quaker contribution.

Join Sue for a fascinating discussion of a little known or studied aspect of quilt history – the quilts of World War I. These quilts of the “Great War” were frequently used for fundraising for war-related causes and are quite rare. This lecture is especially timely as we head into the centennial of World War I, which took place from 1914-1918. Sue is also the author of a forthcoming book on the subject. Quilter, quilt historian and exhibition curator Sue Reich of Connecticut is the author of several books on quilt history including her important previous work, World War II Quilts. Her research and attention to detail marks her as one of the foremost quilt historians in the United States. Find out more about Sue on her website www.coveringquilthistory.com
$25.00

One of the great delights of the television series Downton Abbey is the extraordinary costuming. Madelyn Shaw will take her listeners back to the days of Downton with her fascinating illustrated discussion of the costumes from the series and comparisons to actual period garments. Based on Madelyn’s past experience as a theatrical costumer in New York City, she will be able to offer special insight into why certain choices were made, and what went right – and sometimes wrong.

Conversations on needlework usually focus on the samplers of young women and schoolgirls, but Aimee Newell, Director of Collections for the Scottish Rite Museum & Library in Lexington, Massachusetts, has explored a previously ignored aspect of American needlework in her recent book A Stitch in Time: The Needlework of Aging Women in Antebellum America and will be presenting her intriguing findings to her Penn Dry Goods Market audience. From samplers and needlework to quilts, Aimee will offer a new perspective on how needlework was used by older women in pre-Civil War America as a means of “coping, of sharing, and expressing themselves.”

Journey to Oz with John Fricke, Emmy Award winner, and The Wizard of Oz historian and author of The Wizard of Oz: An Illustrated Companion to the Timeless Classic with this entertaining and enlightening presentation of the costumes of this beloved and classic movie.

John will discuss Adrian's costume designs for The Wizard of Oz, including references to the fabrics involved, the variations considered, and the changes that were effected between diverse wardrobe tests and actual filming. And of course, no discussion of Oz would be complete without the history (and three different design concepts) of the iconic ruby slippers. Don’t miss this rare opportunity to hear John present on this legendary film. And we are also including this special offer: purchase a ticket and bring along a guest aged 8-14 for just $5.00 more! Many of us have grown up loving Oz and this is a chance for young fans to get the behind the scenes scoop on the costume design.

Paying with Credit Card online? Click the Register button below your desired program to pay online by credit card through PayPal.