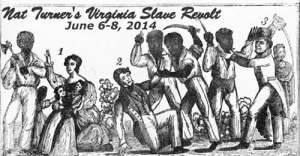 In 1831 the bloodiest slave rebellion in the American South occurred in the commonwealth of Virginia’s Southampton County. Upwards of 60 white men, women and children were murdered in a few days. The revolt’s leader, Nat Turner survived a manhunt of several months, but 65 slaves suspected of being part of the Turner’s rebellion were executed. Another 200 blacks were killed by frenzied mobs and white militias. On November 11, 1831, after a six day trial on charges of “conspiring to rebel and making insurrection,” Turner was convicted, sentenced to death and hanged in Jerusalem (present-day Courtland), Virginia. Turner’s body was flayed, quartered and beheaded. White reaction was swift and decisive. In the aftermath of Turner’s revolt, Southern states enacted laws prohibiting the education of slaves and free blacks, curtailed the assembly of free blacks and required white clergymen to be present at African worship services.

Our tour leader, John Quarstein is well versed in 19th century Tidewater history. He has a special interest in Nat Turner’s Rebellion since becoming a consultant to Southampton County’s proposed museum dedicated to the legacy of Nat Turner.

On this tour we will visit many sites associated with Nat Turner’s Slave Revolt, including the leader’s birthplace, the location where he planned the rebellion, the Joseph Travis (Turner’s last master) House, the Rebecca Vaughan House, the last home where owners were murdered, the site of the Hanging Tree, and Turner’s gravesite. Other sites too numerous to describe will the Giles Reese House, Salathiel Francis House, Piety Reese House, Captain Newitt Harris House, Southampton County Courthouse and Jail, Blackhead Signpost Road, Cypress Bridge, Thomaston, Parker’s Field and Mahone’s Tavern.

Nat Turner’s Rebellion was a watershed event during America’s antebellum period. Its ramifications were felt for decades after Turner’s death. More recently it was popularized by William Styron’s 1967 Pulitzer Prize-winning novel The Confessions of Nat Turner. It is well worth seeing the historic sites interpreted with factual descriptions of this landmark incident, one of many events that helped to break a nation apart thirty years later.

Our Tour Leader: John V. Quarstein, an award-winning author and preservationist, is an experienced tour leader and a much sought after speaker on all periods of American history. He is the author of fifteen books including CSS Virginia: Sink Before Surrender, The Monitor Boys and A History of Ironclads: the Power of Iron Over Wood. He is a consultant to the Mariners’ Museum in Newport News, Virginia and serves of the boards of the Virginia Civil War Trails, Fort Monroe Area Authority and the Virginia Sesquicentennial Commission Advisory Board. In addition, he is a consultant to Southampton County for the creation of a Nat Turner Museum.

What’s included: motor coach transportation, two lunches, beverage and snack breaks, a map and materials package, all admissions and gratuities, and the services of an experienced tour leader. Our hotel will provide a complimentary breakfast buffet each day. Tour participants are responsible for transportation to the headquarters hotel, and securing a room reservation, if necessary. Dinner is on your own. Tour goes out rain or shine. Please see our policy page for information about cancellations.

Hotel: We have arranged with the headquarters hotel for a group rate of $99.00 per night plus tax (double or single occupancy.) Please call the Hampton Inn & Suites Chesapeake-Square Mall, 4449 Peek Trail, Chesapeake, Virginia, 23321 at 757-465-7000 and ask for the America’s History group rate. This rate will be guaranteed until May 5, so please make your reservations soon.