"So Sudden an Alteration": The Causes, Course, and Consequences of the American Revolution 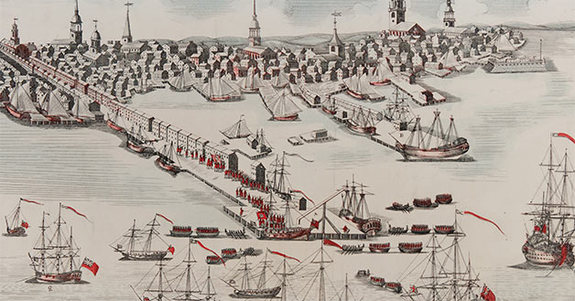 A conference to be held at the Massachusetts Historical Society in Boston in recognition of the 250thanniversary of the passage of the Stamp Act. Sponsors include the MHS, the David Library of the American Revolution, Boston University, and Williams College.

In view of the Revolution’s foundational importance in American history, it is surprising that since the 1980s and early 1990s it has not attracted more attention from the academic community. One reason may be that the “Republican Synthesis” has seemed so compelling that reconsidering the war and its causes has seemed daunting to many.

“‘So Sudden an Alteration” aims to break out of the well-worn grooves of historical inquiry that have defined the study of the Revolution for the past fifty years. The program is designed to promote two types of conversations, shaped by (1) traditional questions of origins and consequences addressed from new perspectives; and (2) questions of intersection—how the Revolution either affected or redirected longer-term patterns of change. In so doing the conference will bring into focus key themes intended to inspire future scholarship.

The conference will feature a keynote address by Woody Holton, the McCausland Professor of History at the University of South Carolina, “‘Not Yet’: The Originality Crisis in American Revolution Studies,” and a proposal by Boston University Professor of History Brendan McConville, "In the Year One: The Revolution Reconsidered," which offers a new approach to thinking about the conflict. It will also include nine panels, each consisting of a discussion of three precirculated papers; a wrap-up discussion; a visit to the Norman B. Leventhal Map Center at the Boston Public Library; and an introduction to Annotated Newspapers of Harbottle Dorr, Jr., the Society’s digital collection of the Revolutionary-era publications that Dorr, a Boston shopkeeper, assembled between the mid 1760s and the mid 1770s, commented on, and indexed.

Conference papers will be made available in advance to those who preregister; they will not be read aloud. In nine sessions on Thursday, Friday, and Saturday, essayists and commentators will offer brief remarks; then, a discussion with the audience will follow.

Woody Holton, University of South Carolina, “‘Not Yet’: The Originality Crisis in American Revolution Studies”

One of today’s leading historians of the American Revolution, Holton is the McCausland Professor of History at the University of South Carolina. He is the author of three books, each widely acclaimed.Forced Founders: Indians, Debtors, Slaves, and the Meaning of the American Revolution (1999) received the Merle Curti Prize of the Organization of American Historians. Unruly Americans and the Origins of the Constitution (2007) was a finalist for the National Book Award in non-fiction. Abigail Adams (2009) earned the Bancroft Prize.

Professor Holton will devote his talk to the problems historians in recent decades have encountered when writing about the Revolution and the prospects for a new understanding of the event. His own writings have focused on the Revolution’s social and economic contexts.

Eric Hinderaker, University of Utah, “Empire of Liberty, Empire in Arms: The Boston Massacre in an Anglo-Atlantic Context”

Peter C. Messer, Mississippi State University, “‘A scene of Villainy acted by a dirty Banditti, as must astonish the Public’: The Boston Massacre and the Customs Conspiracy”

David Preston, The Citadel, “The American Triumvirate: Washington, Lee, Gates, and the Military Origins of the American Revolution”

For all who choose to participate, the Norman B. Leventhal Map Center at the Boston Public Library is hosting a luncheon for attendees to learn about the Central Web Portal, which features a comprehensive collection of American Revolution maps from the Map Center and the world’s foremost cartographic collections. (RSVP when you register.) The Boston Public Library is between a 10- and 15-minute walk from the MHS. The Map Center will lead a group from the MHS to the BPL at the end of the morning sessions.

Paul J. Polgar, College of William and Mary and Omohundro Institute of Early American History and Culture, “The Revolution in Race”

John A. Ruddiman, Wake Forest University, “Is This the Land of Liberty? Continental Soldiers and Slavery in the Revolutionary Tidewater and Low Country”

Gloria McCahon Whiting, Harvard University, “‘the Negroes have left’: African Americans and the Politics of Emancipation in Revolutionary Massachusetts”

Amy Noel Ellison, Boston University, “‘A Reverse of Fortune’: The Invasion of Canada and the Coming of American Independence, 1775-6”

Barry Levy, University of Massachusetts—Amherst, “Ready to Fight: The Realities of Organized Violence in New England and the American Revolution”

Michael A. Blaakman, Yale University, “The Marketplace of American Federalism: Land Speculators, Government, and the Post-Revolutionary Mania in Lands”

Gautham Rao, American University, “The American Revolution and the American State: Rethinking the Problem of the Federal Government”

Session VIa: War and Displacement

T. Cole Jones, Johns Hopkins University, “‘An act never excusable’: The Politics of Retribution, Congressional Retaliation, and the Nullification of the Convention of Saratoga”

Tom Cutterham, New College, Oxford University, “‘What ought to belong to merit only’: Fashioning Elites in the New American Republic”

Brett Palfreyman, Museum of the City of New York, “The Non-juror Problem in Pennsylvania”

Kariann A. Yokota, University of Colorado at Denver, [title TBA]

Register online to access advance copies of the papers that will be discussed. Registration fee: $75/$50 students. Questions? Contact Kate Viens, Research Coordinator, at kviens@masshist.org or 617-646-0568. Papers will be available in March 2015.

Space is limited for this national conference; we recommend registering early to avoid disappointment.

Accommodations for the Conference

We have set up a block of rooms for conference attendees at the Inn at Longwood Medical. The Inn is within an easy walk to the MHS, just over a mile away along the Fenway, past the MFA and the Isabella Stewart Gardner Museum.

We expect to sell out well in advance, so we urge you to make your reservations now.