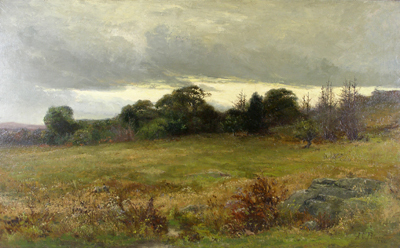 In 1888, at the height of her career, Adelaide C. Palmer (1851–1928) painted this pastoral scene in Piermont titled After the Rain. Palmer grew up in Piermont and had a long career as an artist and teacher. New Hampshire Historical Society collection, gift of the New Hampshire Savings Bank.

Some of the oldest items on display are early 19th-century watercolor drawings and needlework pictures made by young women like Margaret Mitchell (1784–1867) of Peterborough, who received useful educations in local schools and academies, training them for motherhood and life. By the mid-19th century women began to play an important role in the development of American art and, after the Civil War, ambitious young women began to gradually take a more prominent role in the art world exhibiting paintings at venues such as the Boston Art Club and the Museum of Fine Arts, Boston. Among them, women such as Edith B. Robinson (1874–1964) of Epsom also exhibited their work in commercial galleries, building successful careers. Other women, like Maria G. Becket (1839–1904), joined men as tourists in the White Mountains, seeking inspiration from the grandeur of nature and God. 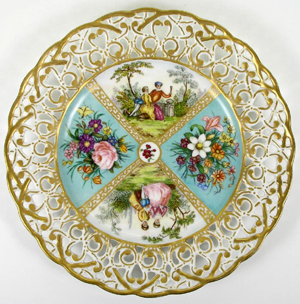 This hand-painted porcelain plate is inscribed on reverse: “H. Pearson. / 1890. / M.E.B. Miller, 1908.” During the late 19th century, china painting became a pastime, livelihood, and art for many American women. Artists Helen Pearson (1870–1949) and her aunt, Mary E. B. Miller (1841–1939), of Portsmouth, worked together decorating this and other china for sale. New Hampshire Historical Society collection, bequest of Dorothy M. Vaughan. 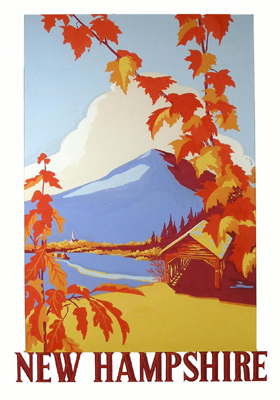 Home, School, and Studio: Women Artists and New Hampshire is on view through December 31, 2013. To learn more about the items in the Society's museum collection related to women artists, explore our online museum catalog.

Admission is $5.50 for adults; $4.50 for seniors; $3 for children 6-18, with a family maximum of $17. Children under 6 and members of the New Hampshire Historical Society are admitted free. Free admission also is offered to active duty military personnel.