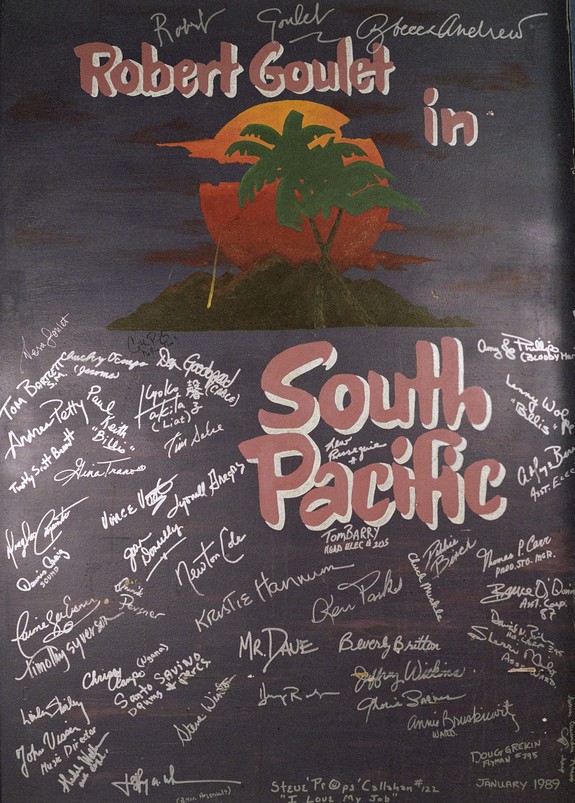 The stage is set for the New Haven Museum’s tribute to one of the Elm City’s most celebrated cultural institutions: “The Nation’s Greatest Hits: 100 Years of New Haven’s Shubert Theatre,” which opens Thursday, September 24, at 5:30 p.m. In large part celebrating the “Golden Age of Theatre,” when a young Julie Andrews and a jittery Rex Harrison premiered in “My Fair Lady,” and a decidedly buff Marlon Brando first bellowed “Hey, Stella!” in “A Streetcar Named Desire,” the exhibition spotlights both the fully polished and the merely promising stars who brought glamour, drama, music and laughter to the Shubert Theatre, and New Haven, for an entire century. Admission to the opening is free.

The exhibition’s first room creates an ambience reminiscent of the “front of the house”: vintage ushers’ uniforms, special lighting effects, a “real” red carpet (which, it turns out, is a strictly custom-made item), and even a small section of theatre seating. Display cases of ephemera, including playbills and photos from some of the Shubert’s greatest triumphs, and a massive, Rolodex-style filing box, with the contact information for stars ranging from Al Jolson to Zero Mostel, provide context for the rest of the exhibit. There are also enormous blown-up photos from much-loved productions such as “Oklahoma,” “The Sound of Music,” and “The King and I,” a fascinating timeline of the theatre’s highlights, and a few surprises.

Further into the exhibition is a “backstage” atmosphere, with photos and details of the logistical aspects of live theatre: the riggings, ropes and lighting so essential to keeping a production moving. Also, enlarged prints from "The Shubert Murals: Broadway in the Basement” by former Shubert board chairman, Cheever Tyler. Tyler’s book captures some of the famed murals located backstage and in the basement of the Shubert prior to the removal of many of them during critical renovations. The colorful murals, created to commemorate shows ranging from  “Into the Woods” to” South Pacific,”  include each show’s logo  as painted on the wall by someone in each production’s touring company, signed by cast and crew members. There are also video clips of Shubert anniversary tributes from some of their most legendary stars, and an impressive display of interior and exterior photos spanning the Shubert’s history and its plans for the future.

“We’ve endeavored to create a fitting finale for the Shubert Theatre’s 100th anniversary year,” says New Haven Museum Executive Director, Margaret Anne Tockarshewsky. “The Shubert has played such a significant role in the city’s cultural history; our hope is that ‘The Nation’s Greatest Hits: 100 Years of New Haven’s Shubert Theatre,” captures some of the elegance and drama of this legendary performance space as their centennial year comes to a close.”

The Shubert Theatre has been a performing arts center presenting plays, musicals, opera, dance, classical music recitals and concerts, vaudeville, jazz artists, big bands, burlesque, and a variety of solo performances since 1914. The Shubert has hosted over 600 pre-Broadway tryouts, including over 300 world premieres and 50 American premieres, double that of any theater in New York City or any other try‑out cities like Boston, Philadelphia, or Washington.

The theater’s first world premiere was “Robinson Crusoe, Jr.” in 1916, starring Al Jolson, who was followed by the era’s legendary stars, including John and Lionel Barrymore, Will Rogers, W.C. Fields, Sara Bernhardt, Eddie Cantor, The Marx Brothers, and more. In 1943, New Haven audiences went wild over a musical comedy entitled “Away We Go,” which later became the renowned “Oklahoma!” Other premieres included “The Cain Mutiny Court Martial,” starring Henry Fonda and Lloyd Nolan, “The Desperate Hours,” with Paul Newman and Karl Malden, and “My Fair Lady.”

The New Haven Museum, founded in 1862 as the New Haven Colony Historical Society, is located in downtown New Haven at 114 Whitney Avenue. The Museum is currently celebrating 150 years of collecting, preserving and interpreting the history and heritage of Greater New Haven. Through its collections, exhibitions, programs and outreach, the Museum brings 375 years of New Haven history to life. For more information visit www.newhavenmuseum.org or facebook.com/NewHavenMuseum.