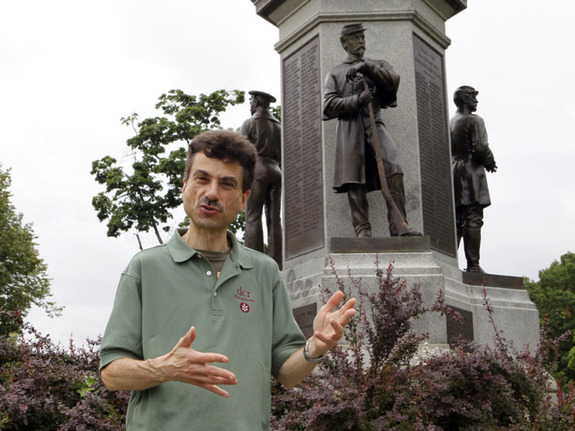 ,
From the EagleTribune.com, North Andover, MA

---- — LAWRENCE — It all started out as a project for a Civil War-related course Richard Padova was taking at Salem State University.

To satisfy his class requirement for his second master’s degree, Padova, who teaches history and government at Northern Essex Community College, designed a historic walking tour of Lawrence called “Boys in Blue.”

“After learning Lawrence had furnished over 2,600 volunteers and draftees, I thought why not design a walking tour with a local Civil War theme?” said Padova.

In addition to his class material, he did research with Joe Bella, of Methuen, a member of the Lawrence Civil War Memorial Guard.

For more than 21 years, Bella has made it his personal project to locate the grave sites of the 3,740 soldiers and sailors from Lawrence and Methuen. So far, he has found more than half of them.

During the 1 1/2-hour walk, Padova focuses on seven soldiers and officers who lived on Mechanics Block, Haverhill, Garden, Jackson and Summer streets. He will speak about each man, rank and occupation after returning from combat.

After the war these men worked in the mills as watchman, laborers and overseers; policemen, letter carriers, businessmen and doctors. The city’s most prominent Civil War veterans were Sgt. Frank Davis, who was elected Mayor in 1869, and Capt. Edgar Sherman, who became a lawyer, State Representative, district attorney, state attorney general and superior court justice.

“I was pleasantly surprise that some of these men were able to achieve such recognition and status giving the physical and psychological stress they carried from the war,” Padova said.

There will be two other stops — at Campagnone Common and City Hall.

On the Common there is a Civil War memorial erected in 1881.

At the base of the column are three bronze figures representing an infantry soldier, a sailor and a dismounted cavalry officer. Inscribed on three plaques are the names of the men from Lawrence who died while fighting for the Union.

At City Hall, participants will see two cannon balls donated in 1865 by Lawrence resident Gustavus Fox, assistant secretary of the Navy during the war. The cannons are held by a pair of giant iron hands, one affixed to the wall on each side of the main stairway. The 350-pound shots were fired from the Union fleet of monitors against Confederate forces that occupied Fort Sumter during the siege of Charleston, S.C., in 1863.

In addition to being the 150th anniversary of the Civil War, Padova said he wanted to highlight Lawrence’s connection to the war.

Padova suspects Lawrence residents were so patriotic because they were supporters of President Abraham Lincoln, who had visited the city before his election.

“Even though he was only here for a few hours, people did not forget that,” he said.

Another reason for the city’s patriotism was because the Merrimack Valley and North Shore had several stops for Underground Railroad, safe houses and secret routes used to help black slaves escape to free states.

In Lawrence, one of the stops was the home of city founder, Daniel Saunders on South Broadway.

“Considering its small size, Lawrence exceeded in the number of men it had to send to the war,” he said. “Patriotism was very strong here at the time, more than in other cities. Back then, Lawrencians understood the importance and the significance of the war and what would happen if the North did not prevail.”

What: "Boys in Blue" Civil War tour When: July 11 and 25 at 10 a.m. Where: Tour meets at Lawrence Heritage State Park, 1 Jackson St., and proceeds to streets around the North Common neighborhood where soldiers and officers lived as well as monuments at Campagnone Common and City Hall.

From Route 495 north or south: Take exit 45 (Marston Street). Take first left onto Canal Street. Go straight through lights then take second right onto Jackson Street. The Visitors Center will be on the right. A small parking lot is located in back of the Jackson Street Visitors Center on Mill Street. In addition there is a private parking garage on Appleton Street (one block west of the Visitors Center). The park is also accessible by bus and train from Boston. Call the park for train schedule.