2015 Signature Conference
"Causes Won and Lost: The End of the Civil War"

The capstone event in the Virginia Sesquicentennial Commission’s Signature Conference series brings together leading historians to discuss the Civil War’s dramatic closing scenes, its turbulent aftermath, and its long-term legacy in American life.

Panel I: Surrenders and the Assassination

Panelists will survey the surrenders of the Confederate armies, take up the controversial issues of why the Confederacy succumbed and the Union triumphed, and assess how Lincoln’s presidency and his assassination shaped the peace.

Panel II: The Lost Cause

Discussions will trace the origins of the pro-Confederate “Lost Cause” understanding of the war, examining its reverberations in postwar politics and its potent role in shaping popular memory.

Panel III: The Union Cause

Panelists will explore the countervailing understandings of the Union Cause, which represented the dominant meaning of the war among Northern soldiers and civilians, and address the postwar efforts of Northerners to enshrine their vision of a righteous Union in American politics and culture.

The final panel will consider African American interpretations and memory of the war, elucidating the experiences of emancipated slaves, of U.S.C.T. soldiers, and of prominent political leaders such as Frederick Douglass and W.E.B. Du Bois.

This wide-ranging conference will serve as an occasion for scholars and the public to join in reflecting on what we have learned collectively during the 150th anniversary of the Civil War. 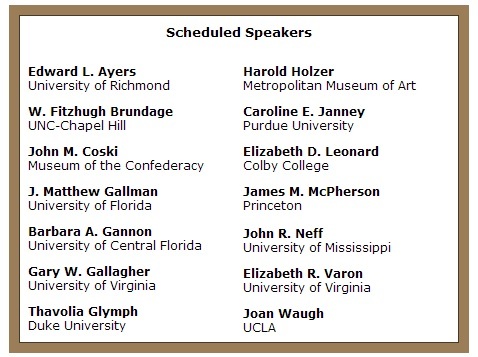 Panel II: The Lost Cause

Registration is filling quickly and will close once capacity is reached. Register soon to secure your space.