On Sunday, July 13th the Hearthside House Museum is proud to celebrate an important event in our nation’s history—the 1904 World’s Fair held in St. Louis.  In a tribute to this grand Fair, Hearthside will sponsor a two-part event which includes a special museum exhibition as well as an outdoor festival, providing visitors with an understanding of the “Greatest World’s Fair ever” and all that it entailed. The complexity and scale of this international event was astonishing.
During the July 13th event at Hearthside, visitors may take a self-guided tour through the historic house where an extensive exhibit will be on display throughout the rooms, which will include photographic displays, interpretive panels, video presentation, and memorabilia to provide visitors with an appreciation of the importance of this turn-of-the-century world event, but also how Rhode Island had such a prominent role at the Fair.  Rhode Island’s business, education, and governmental achievements were at an all-time high, as evidenced by numerous awards at the Fair.  The Hearthside event celebrates that, but also recognizes that there are many good things happening in our state right now that deserve to be celebrated too. 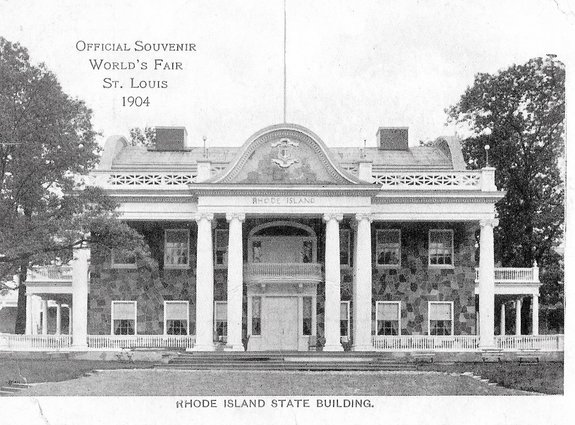 The grounds surrounding the 1810 Hearthside House will be filled with the nostaligic sights and sounds that were found along “The Pike,” with turn-of-the-century fashions worn by Hearthside’s volunteer staff, and a program of non-stop entertainment all day long on the outdoor stage.  There will be lively music and songs from the era performed by professional singer Brian DeLorenzo, the Greenwich Bay Brass Band, belly dancing and Middle Eastern folkloric dance by the Beledi Dance Troupe, historic magic acts by renowned RI magician Bruce Kalver, a reptile show by Sabrina’s Reptile Kingdom, presentations on historic foods of the Fair by authors Keith Stavely and Kathleen Fitzgerald with book signing, baseball at the turn-of-the century by Ed Achorn and book signing along with demonstrations by the Providence Grays baseball team, and Rhode Island history author Ray Wolf speaking on the former mills and villages of Rhode Island, also with book signing.

There will also be amusements such as a juggling stilt walker, old-fashioned games of skill and chance for kids and adults, such as the strength striker bell, ring toss, bottle knock down, arcade type games as well as simple games like sack races, tug of war, and water balloon toss.
The foods made popular at the Fair, such as hot dogs, cotton candy, iced tea, and ice cream cones will also be featured, all adding to a charming and fun summertime outing for families and giving visitors a small taste of what fairgoers experienced.  A Pie Contest is another feature that will take place, with area restaurants and bakeries competing for the “best pie” selected by popular vote at the event.  Among those participating are Dave’s Market, Whole Foods, Zaccagnini’s Pastry Shoppe, Jaswell Farms and Davenport’s Restaurant.
The 1904 St. Louis World's Fair, a centennial celebration of the Louisiana Purchase Exposition, was held over a period of just 7 months, and by the end of it, over 20 million people had experienced history’s greatest international exhibition.  Fifty-three nations came together to showcase the world’s innovations and diverse cultures. There were carnival type attractions found along the mile-long “Pike,” where one could get a “bird’s eye view” of the Fair from atop the world’s largest Ferris wheel. Another feature of Hearthside’s exhibit will be a custom-built, operating tabletop model of the gigantic Ferris Wheel, created by Burr Sebring, a former designer with Gorham Manufacturing which was a featured exhibitor at the St. Louis Fair.
Throughout the Fair, Rhode Island had a prominent role.  Rhode Island’s Pavilion, which represented all that was great about the state, was a reproduction of Stephen Hopkins Smith’s mansion in Lincoln, now known as Hearthside.  The design, selected after a competitive process among the state’s architects, was a re-creation of the colonial-style mansion.  Its design was meticulous, from the ogee gable to the fabrication of the field stone look used in the outer walls.  Design elements for the interior were taken from other Rhode Island homes and buildings.
Kathy Hartley, President of the Friends of Hearthside, sponsors of the event, states, “What is remarkable is that all of the Fair’s 1,500 buildings were built as temporary structures and then demolished upon completion of the Fair.  But, some were saved, having been purchased at the end of the Fair and re-purposed.  The Rhode Island Pavilion was one such building.  It was moved to a suburb of St. Louis, where it was reconstructed as a family home without many of its original architectural elements. Laura Murch Moran, who grew up in that relocated World’s Fair building, recently visited Hearthside and donated a significant part of their World’s Fair collection which will be exhibited at the event.  She will also give a brief presentation about what it was like growing up there.”

The 1904 World’s Fair embodied the interests and aspirations of a nation at the turn of the century.  America’s achievements in science, agriculture, technology, and art, were celebrated with 43 states exhibiting their finest in magnificent pavilions and gigantic ornate palaces which stretched the lengths of several football fields.
In 1904, Rhode Island was a national leader and deemed a “center of productive industry.  There were 4,600 active manufacturing establishments, and were growing at such a rapid rate, that it exceeded the rate of percentage of the population.  Local companies such as Brown & Sharpe, Gorham, and U.S. Rubber were among those featured at the Fair. Rhode Island was recognized for excellence in numerous areas, including public education and manufacturing.
On July 13th, Hearthside hopes to inspire Rhode Islanders to have pride in their state once again with a look back in history and to what was probably our state’s proudest moment.  Leadership Rhode Island has recently launched a statewide effort to improve the Rhode Island psyche through the “Make RI Stronger” initiative and will be present at the event to talk about many of the ways in which Rhode Island is still great.  Among the many awards received by Rhode Island businesses and organizations was a Silver Medal to Providence’s Wheeler School.  That award will be on display at the July 13th exhibit.  One of Rhode Island’s successful young businesses that has been touted as a good example of a business start-up is Granny Squibbs Iced Tea.  Using a family recipe from 1919, Robin Squibb has launched her premier iced tea products that are now widely distributed throughout New England and New York.  Granny Squibbs is one of the sponsors of this World’s Fair event.  Also sponsoring is the Rhode Island Manufacturers Association, who is promoting their initiative to get young talented workers to select a career in manufacturing and help overcome the stodgy image manufacturing has had.
Major support for the World’s Fair event is provided by a grant from the Rhode Island Council for the Humanities, as well as from the Lincoln Shopping Center, Twin River Casino, Luxury Cleaners, Alphagraphics, American Beauty Signworks, The Valley Breeze, and Granny Squibbs Iced Tea.  Other sponsors include the Rhode Island Manufacturers Association, Navigant Credit Union, Dupois Oil, Anchor Medical Associates, Newport Creamery, and Mr. and Mrs. William R. Talbot, whose ancestors purchased Hearthside in 1904.  Additional support is provided several area businesses.
The event gets underway at 10:00 a.m. and will run till 6:00 p.m.   Fair foods will be available for purchase and vendors include Newport Creamery, Del’s Lemonade, Granny Squibbs Iced Tea.

The fundraising event is sponsored by the all-volunteer nonprofit organization Friends of Hearthside who operate the historic house as a museum.  All proceeds benefit the continued preservation of this 200-year old house.
Hearthside House Museum is located at 677 Great Road in Lincoln.  For more information, call 401-726-0597, email kathy.hartley@hearthsidehouse.org, or visit http://www.hearthsidehouse.org for detailed schedule of activities at the event.
###
Built in 1810 by Stephen Hopkins Smith with winnings from a lottery, Hearthside is listed on the National Register of Historic Places.  It remained a private home for nearly 200 years before being purchased by the Town of Lincoln.  A nonprofit volunteer organization, the Friends of Hearthside, have transformed it into a house museum and serve as its stewards.  Funds raised from tours and special events help to support its continued preservation.

Hearthside is on left.

Parking is beyond Hearthside at the Chase Farm Park.  Handicap parking across the street from Hearthside.