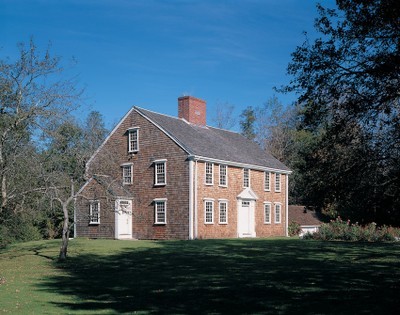 In 1936, Mary Thacher had Winslow Crocker House moved six miles down the Old King's Highway to its present location. Over a ten-month period, the house was taken apart, beam by beam, and reassembled next door to her ancestral home in Yarmouth Port. Miss Thacher remodeled the interior of the house to provide an attractive backdrop the significant collection of antique furniture she collected over her lifetime.

The house was built around 1780 by Winslow Crocker, a wealthy trader and land speculator. Considering that Cape Cod in the eighteenth century was a region of small farms and fishing ports, the Winslow Crocker House is surprisingly elaborate, with rich paneling in every room. 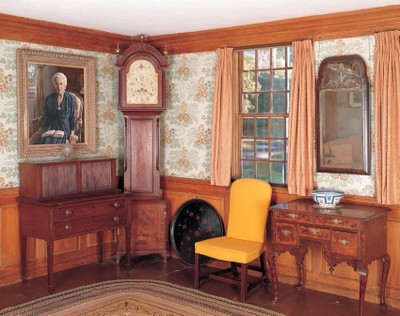 Visitors learn about Miss Thacher’s ambitious relocating and remodeling of Winslow Crocker House, including changes she made to the paneling, windows, and fireplaces. The result of her efforts is a colonial Cape Cod house with a twentieth-century flavor. Rooms are filled with Miss Thacher's impressive collection of furniture, which represents a thorough survey of early American styles, including Jacobean, William and Mary, Queen Anne, and Chippendale. The furniture is accented by colorful hooked rugs, ceramics, and pewter.

The Winslow Crocker House is a Historic New England property.

Top photo: Winslow Crocker House exterior - The house was built in West Barnstable c. 1780 by Winslow Crocker, a trader and land speculator. While the exterior is a typical five-bay Georgian house, the interior is surprisingly elaborate for Cape Cod in the eighteenth century. In a region of small farms and fishing ports, the rich paneling, large rooms, and elegant details of the house make it unusual for its time and place. The house was moved to Yarmouth Port in 1938.

Bottom: Parlor - This parlor was the best room in the house when it was built by Winslow Crocker c. 1780, and was also a formal room in Mary Thacher’s time. Containing some of the house’s most elegant furnishings, the room was used for visiting and entertaining. Mary Thacher’s own portrait hangs in this room, overlooking eighteenth-century furniture and hooked rugs.

Parking: There is street parking along Strawberry Lane, just east of the Winslow Crocker House off of Route 6A.