The average visit is 30 - 45 minutes depending on the number of other visitors.

Note: There are no public restrooms or telephones on the site.

The history of the house

On the night of April 18, 1775, silversmith Paul Revere left his small wooden home in Boston's North End and set out on a journey that would make him into a legend. Today that home is still standing at 19 North Square and has become a national historic landmark. It is downtown Boston's oldest building and one of the few remaining from an early era in the history of colonial America. 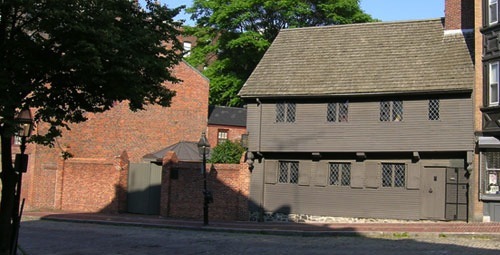 The home was built about 1680 on the site of the former parsonage of the Second Church of Boston. Increase Mather, the

Minister of the Second Church, and his family (including his son, Cotton Mather) occupied this parsonage from 1670 until it was destroyed in the Great Fire of 1676. A large and fashionable new home was built at the same location about four years later.

The first owner of the new two-story townhouse on North Square was Robert Howard, a wealthy merchant. By the mid-eighteenth century, the front roof line of the building had been raised and a partial third story added. Paul Revere purchased the home in 1770, moving his family here from their Clark's Wharf residence. The former merchant's dwelling proved ideal for Revere's growing family, which in 1770 included his wife, Sarah, five children, and his mother Deborah.

Paul Revere owned the home from 1770 to 1800, although he and his family may not have lived here in some periods in the 1780s and 90s. After Revere sold the home in 1800, it soon became a tenement, and the ground floor was remodeled for use as shops, including at various times a candy store, cigar factory, bank and vegetable and fruit business. In 1902, Paul Revere's great-grandson, John P. Reynolds Jr. purchased the building to ensure that it would not be demolished. Over the next few years, money was raised, and the Paul Revere Memorial Association formed to preserve and renovate the building. In April 1908, the Paul Revere House opened its doors to the public as one of the earliest historic house museums in the U.S. The Association still oversees the preservation and day-to-day operations of this national treasure.

As an added bonus, the courtyard features a 900 pound bell, a small mortar and a bolt from the USS Constitution, all made by Paul Revere & Sons.

Blind/Vision Impaired
A large print brochure, introductory audio tape, and tactile replicas of Paul Revere's silver and other items of historical interest are available during tours.

Deaf/Hard of Hearing
Printed panel information is provided. Call or visit our Events page for the schedule of sign language interpreted lectures and programs.

Wheelchair/Mobility Impaired
For people using wheelchairs the courtyard, first floors of both buildings and performance spaces are accessible. Access to the Revere House for a standard size wheelchair is barrier-free. A picture book of the second floor is available. Access to the first floor of The Hichborn House is also available via a portable ramp, with staff assistance.

The Paul Revere House is located between the Faneuil Hall and Old North Church stops on the Freedom Trail. The site can be reached by car, but the narrow one way streets and limited parking make the subway the best option.

On the Freedom Trail in Boston's North End, follow the signs and the red line on the sidewalks. Ten minutes from Faneuil Hall / Quincy Market.

From North: Route 93 South to Exit 24A - Government Center. Follow the ramp to the surface, staying to the left, and bear left at the light. Follow the signs for the North End onto Atlantic Avenue. Take a left on Richmond Street. The third street is North Street, take a right.

From West: Route 90 East (Mass. Pike) to Route 93 North to Exit 23. Turn right at the first light onto North Street.

From South: Route 93 North to Exit 23. Turn right at the first light onto North Street.

Street parking near the Revere House is very limited, though there are some lots within a few blocks.