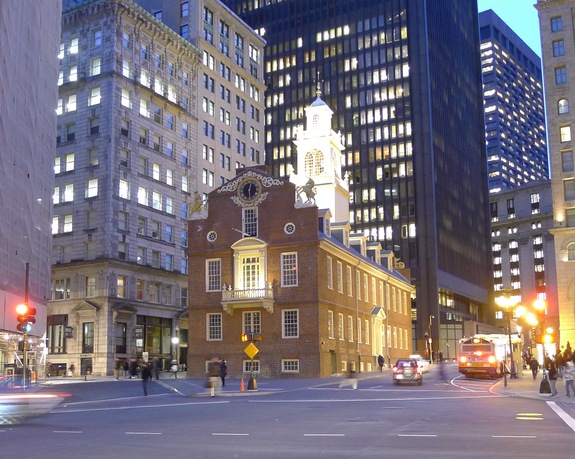 The Bostonian Society is dedicated to studying, and preserving Boston’s uniquely important history, embodied in materials, records, and structures such as the Old State House, and in sharing an understanding of the revolutionary ideas born here.

The Old State House, the oldest surviving public building in Boston, was built in 1713 to house the government offices of the Massachusetts Bay Colony. It stands on the site of Boston's first Town House of 1657-8, which burned in 1711. The Old State House was a natural meeting place for the exchange of economic and local news. A Merchant's Exchange occupied the first floor and the basement was rented by John Hancock and others for warehouse space. As the center of political life and thought in the colonies, the Old State House has been called one of the most important public buildings in Colonial America.

Open 7 days a week, 9 a.m. to 5 p.m.
During January, 9 a.m. to 4 p.m.
During July and August, 9 a.m. to 6 p.m.
Closed New Year's Day, Thanksgiving Day, and Christmas Day
Closed to the public for yearly maintenance every first work week in February

Gallery tours are offered on the hour throughout the day.

The History of the Old State House

The Council Chamber of the Royal Governor was located upstairs at the east end of the building, looking toward Long Wharf and the harbor. This room was the setting for many stirring speeches and debates by dedicated patriots against the British crown. In 1761, James Otis argued eloquently against the Writs of Assistance, the Crown's policy which issued general search warrants without charges. Otis lost the case, but his impassioned speech was one of the events which led to the American Revolution. "Otis was a flame of fire," recalled John Adams, ". . . then and there the child Independence was born."

The central area of the second floor was the meeting place of the Massachusetts Assembly, one of the most independent of the colonial legislatures. This Assembly was the first legislative body in the colonies to call for sectional unity, and the formation of a Stamp Act Congress. Although no trace remains today, a visitor's gallery was installed in Representatives Hall in 1766. The gallery permitted citizens, for the first time in the English-speaking world, to hear their elected officials debate the popular issues of the day.

Home of the Courts

The building's west end was home to the Courts of Suffolk County and the Massachusetts Supreme Judicial Court for many years. The Supreme Judicial Court is the longest seated court in the nation (over 300 years old) and was responsible for the ruling decisions in many of the early landmark trials. The Court was also involved in the drafting of the Massachusetts Constitution, upon which the United States Constitution is based.

Official proclamations were read from the Old State House balcony, on the east side of the building, looking down State (formerly King) Street. The area beneath the balcony was the site of the Boston Massacre on March 5, 1770, when a handful of British soldiers fired into a taunting crowd, killing five men. Today a circle of paving stones marks the spot of the Massacre.

On July 18, 1776, the Declaration of Independence was first proclaimed from here, to the jubilant citizens of Boston. Later that day, the lion and unicorn, along with other symbols of royal authority, were taken down from the roof of the building and burned in a great bonfire in Dock Square.

In 1841, the building returned to commercial use. During the mid-nineteenth century, the building entered a period of decline, suffering many alterations made to accommodate its tenants.

In 1879, a group of determined citizens formed the Boston Antiquarian Club. Two years later, the group reorganized themselves as The Bostonian Society, and began to operate a museum of Boston history in the Old State House.

Today, the Old State House is located amid the skyscrapers of downtown Boston as a museum of the building's history, particularly its role in the American Revolution. The Old State House, operated by The Bostonian Society and owned by the City of Boston, is a site within the Boston National Historical Park and one of the museums on the Freedom Trail.

Take the Orange or Blue Lines to State Street. Follow signs for "Old State House" to street level. The station is directly beneath the Old State House; the entrance to the Library is across the pedestrian mall at 15 State Street (under the National Park Service Visitor Center sign).

Or, take the Green Line to Government Center, and walk down Court Street one block to State Street.

Or, take the Red Line to Downtown Crossing and walk down Washington Street toward City Hall to State Street (several blocks).

Driving from the North: Take 93 South to exit 24 B-A (for AIRPORT (RT-1A North)/GOV'T CENTER). Follow signs for 24 A/GOV'T CENTER. Off the ramp, turn left onto John Fitzgerald Surface Road. Travel .1m and turn right onto State Street. The Old State House is on the corner of Washington Street, but you will see the building in front of you as you come up State Street. Parking suggestions are below. Be warned that driving directions vary often due to road construction.
The entrance to the Library is across the pedestrian mall at 15 State Street (under the National Park Service Visitor Center sign).

Driving from the South: Take 93 North to exit 23/GOV'T CENTER toward GOV'T CENTER/FANEUIL HALL/FINANCIAL DISTRICT/AQUARIUM. Off the ramp, turn left onto John Fitzgerald Surface Road. Travel .1m and turn right onto State Street. The Old State House is on the corner of Washington Street, but you will see the building in front of you as you come up State Street. Parking suggestions are below. Be warned that driving directions vary often due to road construction.
The entrance to the Library is across the pedestrian mall at 15 State Street (under the National Park Service Visitor Center sign).

Parking suggestions: There are several parking garages in the vicinity of the Old State House: