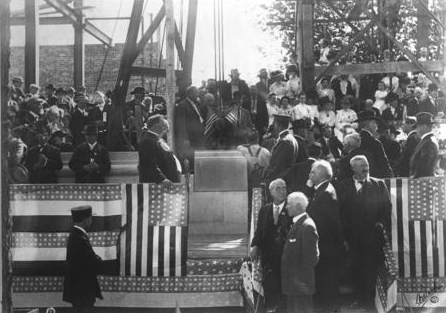 "Kansas has the fullest collection ever made by any state in its early years, because this was the first Society that began its career by collecting and preserving every copy of every newspaper published in the state," said Secretary George Martin, in his 25th annual address of the Historical Society in 1900.

The Historical Society collections continued to grow.  In 1893 the legislature authorized the Historical Society to occupy three rooms in the south wing of the statehouse.  The board of directors reported that collections filled "every nook and corner of the main room of the Society from floor to ceiling; they occupy cases in the corridors, and they occupy three rooms in the cellar of the State House."

In 1905, the Kansas Legislature passed a bill establishing the Historical Society as the repository of official government records.  Thus, the Society became the State Archives for Kansas, receiving non current government records that need to be retained permanently.  This responsibility continues today with the relatively new challenge of preserving and providing access to state government electronic records.

A $90,000 Civil War claim from the federal government and a legislative appropriation helped to solve the Historical Society's immediate space concerns.  On September 27, 1911, President William Howard Taft was the honored guest at the laying of the corner stone of the new Memorial Building.  Built as a monument to the Union veterans of the Civil War, the building opened in 1914.  The Historical Society moved more than 440,000 objects and effects to the new quarters, shared with the Grand Army of the Republic, a Civil War veterans organization.

The Historical Society added a new type of collection in 1927 with the acquisition of two state historic sites.  The annual meeting report celebrated the addition of "Shawnee Mission in Johnson County, [and] the old Capitol at Fort Riley. . ."  Other historic sites have been acquired over the years.

In 1984 the museum moved to a new building located in northwest Topeka.  Situated on 80 acres, the museum was located next to one of the state-owned historic buildings, Potawatomi Mission. The Historical Society established a website in 1983, one of the first historical societies to do so. In 1995 the State Archives & Library also moved to the complex. In January 2001 a third storage bay was added to the State Archives building, providing an additional 22,000 square feet of space for storing mainly library and archives collections.

The Kansas State Historical Society operates as a state agency supported by state appropriations. More than a half million individuals benefit from our programs and services each year. All activities and programs are conducted by the private organization and the Society's six divisions, Administration, Cultural Resources, Education and Outreach, Historic Sites, Museum, and State Archives and Library.

The Kansas History Foundation, a nonprofit corporation supports the work of the state agency.  The Foundation offers membership to the public and institutions, manages grants for the state agency, operates the museum and historic sites stores, and provides fiscal support for various programs, including the Historical Society's award-winning scholarly journal, Kansas History: A Journal of the Central Plains, and Reflections, highlighting the Historical Society's collections.  It also supported a children's magazine, Kansas Kaleidoscope, and a popular history magazine, Kansas Heritage, which are no longer published.

During the past century, the Historical Society's role expanded beyond its original emphasis on collecting and publishing research. Today the Society continues these fundamental activities and has added a broad array of interpretive and educational programs that combine with historic sites, technical assistance, and field service programs. Through collections, exhibits, programs, and services, the Society enriches the lives of thousands and serves in understanding and valuing the heritage of Kansas.