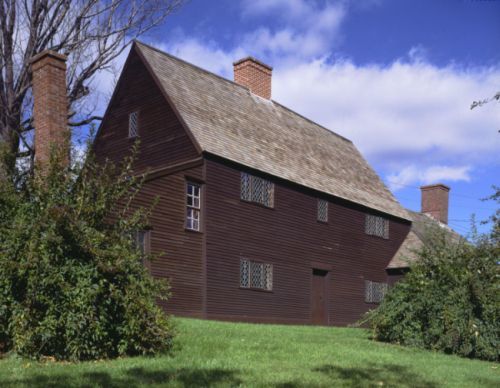 Jackson House is the oldest surviving wood-frame house in New Hampshire. The house was built by Richard Jackson, a woodworker, farmer, and mariner, on his family's twenty-five-acre plot.

Jackson House resembles English post-medieval prototypes, but is notably American in its extravagant use of wood. Succeeding generations added a lean-to by 1715, and more additions in the eighteenth and nineteenth centuries to accommodate several different family groups sharing the house at once. 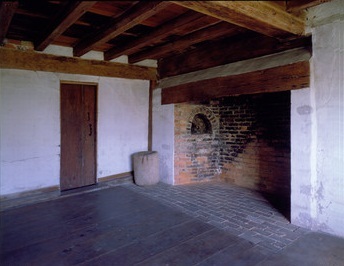 Historic New England’s founder, William Sumner Appleton, acquired the house in 1924 from a member of the seventh generation of Jacksons to live here. Despite pressure to remove post-seventeenth-century additions, Appleton limited his restoration to stripping off twentieth-century lath and plaster and replacing eighteenth-century sash with diamond-paned casements where evidence of the original fenestration was too compelling to ignore.

The Jackson House is a Historic New England property.

Top photo: Richard Jackson House - The Jackson House, the oldest timber-framed dwelling in New Hampshire, was constructed with sawn lumber in the midseventeenth century. Richard Jackson, a cooper among other things, situated his house above the North Mill Pond which, when it was built, was “on the other side of Strawbery Banke Creek.” Richard owned 25 acres, which he merged with the adjoining 25 acres owned by his father-in-law. The house was built with vertical planks that run from the sill to the plate. There are no studs supporting the walls, only the window openings. The roof pairs rafters with the major posts, collar beams, and purlins to support vertical roof boards. The first floor ceiling and second floors and ceiling are supported with impressive summer beams, complete with chamfered edges with lamb's tongue stops. William Sumner Appleton purchased the house for SPNEA, now known as Historic New England, in 1923 from the ninth generation of Jacksons to reside in the property.

Bottom photo: Jackson hall - The hall, a room we could consider the kitchen today, was likely the gathering place for the Jacksons. This is where the cooking, dining, washing, preparing, canning, and other domestic activities took place. You can see the door that accesses the lean-to to the left of the frame. The lean-to was added by 1715, when it was referred to as the “butry” and was used for cold storage.

Parking: There is street parking along Northwest Street.