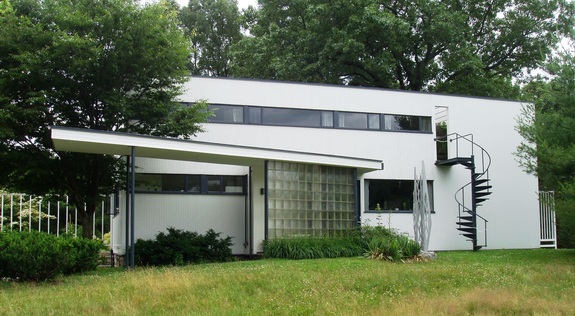 Walter Gropius, founder of the German design school known as the Bauhaus, was one of the most influential architects of the twentieth century. He designed Gropius House as his family home when he came to Massachusetts to teach architecture at Harvard's Graduate School of Design.

Modest in scale, the house was revolutionary in impact. It combined the traditional elements of New England architecture—wood, brick, and fieldstone—with innovative materials rarely used in domestic settings at that time, including glass block, acoustical plaster, chrome banisters, and the latest technology in fixtures. 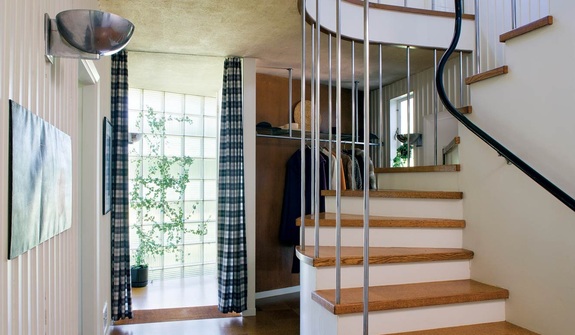 In keeping with Bauhaus philosophy, every aspect of the house and its surrounding landscape was planned for maximum efficiency and simplicity of design. The house contains a significant collection of furniture designed by Marcel Breuer and fabricated in the Bauhaus workshops. With the family's possessions still in place, Gropius House has a sense of immediacy and intimacy.

The Gropius House is a Historic New England property.

Top photo: Another view of the Gropius House - Furthermore, Gropius carefully sited the house to complement its New England habitat on a rise overlooking an apple orchard and fields. The house was also built with economy in mind. The screened porch and terraces extend the living spaces outdoors, it is sited for maximum ventilation and passive solar heating, and all fixtures and building supplies were factory-made items readily available form catalogs and supply houses in the United States. Using the Bauhaus design approach the house utilizes standard materials and products. The result is a regionally inspired house that employs the philosophy and goals of the Modern movement.

Bottom photo: First floor hallway - The entry and hallway illustrate Gropius’s use of traditional New England forms and ideas. The central hall with doors at both front and rear, reminiscent of eighteenth-century homes, ensures cross ventilation. Inside the front door is a mudroom, separated from the hall by a curtain rather than a door, that could be closed to keep out the cold and opened to enhance ventilation. White clapboards, a traditional New England material, are used in a non-traditional way to great effect. Brought inside and applied vertically, Ise felt that “their narrow vertical shadows relieve the white blandness and make an excellent background for artwork.” The central stair, again a New England tradition, is modified by Gropius. The curved staircase faces away from the entry, signifying the upstairs as private space.

Showing next 25 events coming up.

Parking: On-site parking is available in the upper and lower parking lots adjacent to the Gropius House and the visitor center.

Public Transportation: MBTA Commuter Rail on the Fitchburg Line to the Lincoln stop. Local taxi service is available from the train station to the house.