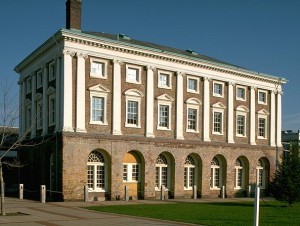 Market Building was designed by Peter Harrison and constructed in 1762. It originally functioned as an open-air market with merchants and offices on the upper floors. The building, located in the heart of Colonial Newport and directly across Washington Square from the Colony House, is considered one of Newport’s architectural treasures. It has had a varied history of use over the past 245 years, including a printing office, a theater, and Town Hall, and has also been altered and renovated frequently over the years. In 1928-1930 the building was completely restored under the guidance of Norman Isham, and the building was again restored before 1993 under the auspices of the Brick Market Foundation, led by Ralph Carpenter.

Owned by the City of Newport and managed by the NHS, the Brick Market Building is now home to the Museum of Newport History (see below) and the Museum Shop.  Several items in the shop are also available online.

The Museum & Shop at Brick Market is the departure point for walking tours and historic site tours.

Admission: Suggested donation of $4/adult and $2/child over age 5.  (Admission to the store (above) is free.)

Located in the 1762 Brick Market (designed by Peter Harrison) our award-winning Museum is the perfect place to begin a visit to Newport. The Museum provides the whole family with an engaging introduction to the area’s rich history and the beauty of its architecture. Glimpse the lives of the people–past and present–who have made Newport one of America’s most historic cities. Open daily, the Museum & Shop at Brick Market is an information center and departure point for guided walking tours.

The Museum & Shop at Brick Market brings Newport’s unique and exciting story to life. Located on Washington Square, the Museum provides the whole family with an engaging introduction to the area’s rich history, architecture, and the stories of the people who have made Newport one of America’s most important historic cities.

Exhibits feature James Franklin’s printing press, the figurehead from the yacht Aloha,photographs, furniture, colonial silver, paintings, objects of daily life and more, all from the collections of the Newport Historical Society.

Wealthy Americans who, along with gifted artists, writers, and architects, made Newport their summer resort during the Gilded Age.

Board a reproduction 1890s omnibus to watch a video tour of historic Bellevue Avenue.