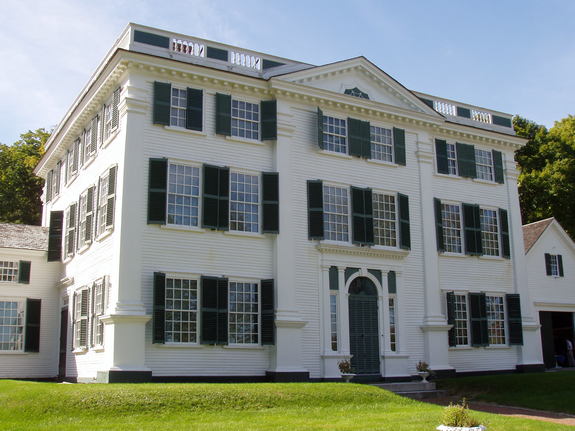 Barrett House, also known as Forest Hall, was built c. 1800 by Charles Barrett Sr. for his son Charles Jr. and daughter-in-law Martha Minot on the occasion of their marriage. According to tradition, its grand scale was encouraged by Martha’s father, who promised to furnish the house in as lavish a manner as Barrett Sr. could build it. 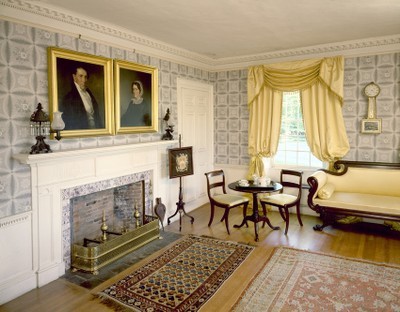 Visitors learn about the multiple generations that resided at Forest Hall, their lifestyles, and the impressive country estate that represents a vanished way of life from a time when New Ipswich was an active mill town.

The Barrett House is a Historic New England property.

Top photo: Barrett House - Barrett House, also known as Forest Hall, was built . 1800 by Charles Barrett Sr. for his son and daughter-in-law, Charles Jr. and Martha Minot, on the occasion on their marriage. Charles Barrett Sr., a mill owner, farmer, land speculator, and local politician, was a prominent resident of New Ipswich. He had great aspirations for his family and looked to secure their place in society. Building the grand and fashionable Federal-style Barrett House on the edge of the village of New Ipswich demonstrates his efforts.

Bottom photo: Parlor - The Barretts' parlor was used for formal entertaining, such as hosting guests and visitors for tea and conversation. Fitting its formal function, the decorative wood work and architectural details in this room are more ornate than those seen in any of the other public spaces in the house. Charles Jr. (1773-1836), like his father before him, was a business man and local mill owner. Together with his business partner, Samuel Appleton, the grand uncle of William Sumner Appleton, the founder of Historic New England, Charles Barrett Jr.’s business prospered handsomely during the early nineteenth century, a time when the local economy and mill industry were booming. His business interests enabled him and Martha (1771-1842) to live a comfortable and elegant lifestyle in New Ipswich. They lived at the Barrett House for much of their lives, raising a family of five children.

Directions detail: From Route 2, take Exit 32 to Route 13 north toward Townsend, Mass. Take a left on Route 119, then right on Route 124 in West Townsend. Go 10 miles to New Ipswich. Turn left onto Main Street (Route 123A). Barrett House is .25 miles south on the right.

Parking: There is limited parking available in the Barrett House driveway. Ample street parking is available.