The top battle reenactments this year, including the Revolutionary War, Civil War, WWI, and WWII reenactments and more.

If you have attended a reenactment that belongs on this list, please let us know. 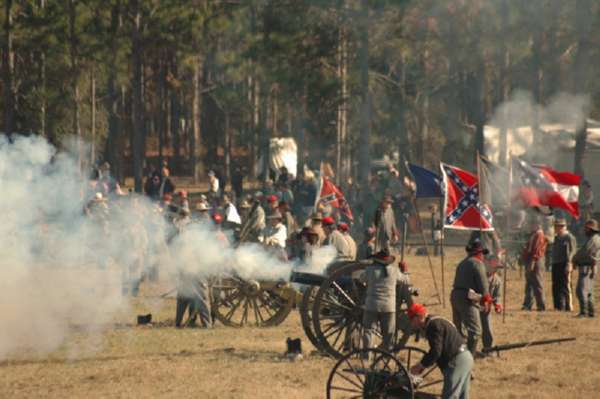 The largest Civil War reenactment in Florida with over 1500 reenactors and their families, 28 cannons, 60 horses, and over 50 sutlers. The annual Brooksville Raid reenactment is a re-creation of a Civil War battle that happened in Hernando County in July of 1864. The event features authentic confederate and union camps - step back in time and see for yourself how the war was fought and the many support personnel who worked to supply the soldiers, and their war efforts.

Each February, the town of Yale comes alive with this annual reenactment. This event recreates a winter encampment of the Civil War era and takes place over three days, with living history Union and Confederate soldiers setting up opposing camps. Activities include time period weaponry displays, cooking demonstrations, lectures, sutlers and many more.

Annual Reenactment of the Battle of Olustee or Ocean Pond
February 15 -17, 2019
Sanderson, Florida

Florida’s annual reenactment of the Battle of Olustee draws over 30,000 crowds each year. Be sure to attend on a Saturday to witness the climax of the weekend when 2,500 reenactors of Confederate and Union troops advance on the battlegrounds and engage in combat at the same place where the actual Battle of Olustee took place on February 20, 1864.

A free event that is open to the public. Activities during this weekend include different battle reenactments that can be witnessed throughout the day, as well as, artillery and sword demonstrations, live music, 18th-century dancing and plenty of food options. 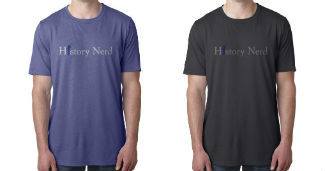 Also available in a sticker. 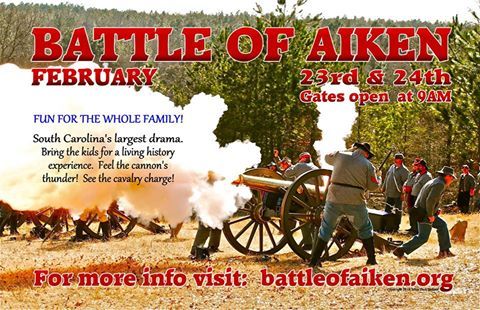 For two days, reenactors eat, sleep, live and fight in a painfully recreated version of the world in 1865. This War Between the States features authentic 19th-century military encampments, cannons, cavalry horses, living history presentations, reproductions of medical facilities, an engineer and signal service, and civilian portrayals.

On the southern end of Broxton Bridge Plantation, there is an old battleground, complete with all the breastworks, left over from the South's defenses on February 1, 1865, which happened 153 years ago. Relive the last big defensive effort for the Confederates before the battle of Columbia. The special attraction includes the H. L. Hunley submarine traveling exhibit.

The annual reenactment will mark the 156th anniversary of "The Siege of Port Hudson." Visitors will have access to reenactors from both the Union and Confederate armies. Campsites will be open to the public. The battle reenactments are scheduled for 2:00 PM on Saturday, and 1:30 PM on Sunday.

Thousands of people flock to historic Lexington and Concord and Minute Man National Historical Park every year to celebrate Patriots' Day, a special Massachusetts State holiday commemorating the opening battle of the American Revolutionary War on April 19, 1775. One highlight of the event is the "Parker's Revenge" Battle Demonstration on April 13 which will begin at 1:00 in the afternoon. Hundreds of British and Colonial re-enactors will engage in a tactical weapons demonstration showing the running battle that took place on the border of Lincoln and Lexington. 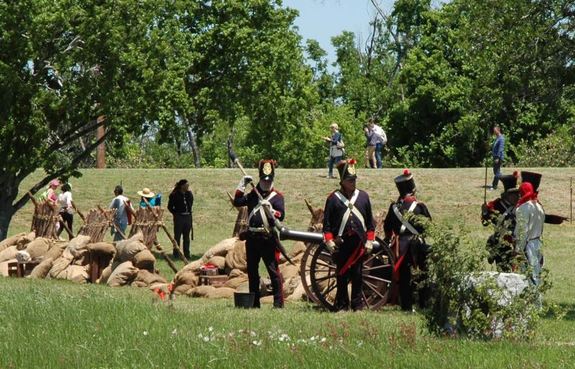 Booming cannons, cracking musket fire, thundering hooves and desperate battle cries resound across the San Jacinto Battleground as hundreds of history reenactors recreate the events leading up to Texas winning its independence from Mexico 181 years ago at the decisive Battle of San Jacinto on April 21, 1836.

"Join or Die" shirt in charcoal grey
The design wraps around the left side of the shirt, with "Join" on the front and "or Die" on the back. It's unique and sure to surprise and delight. 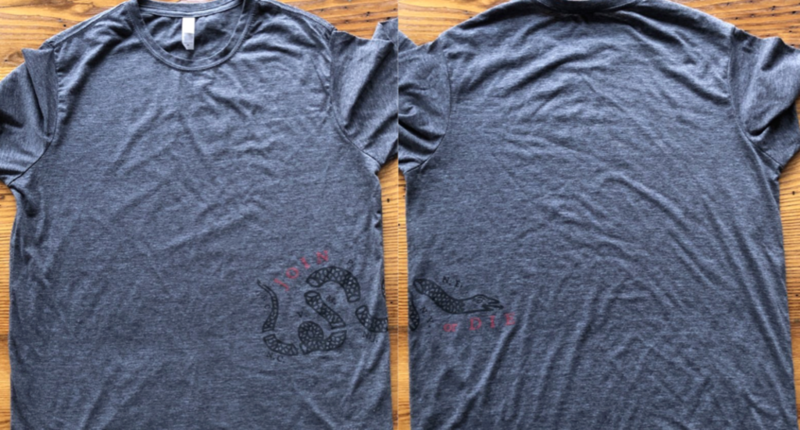 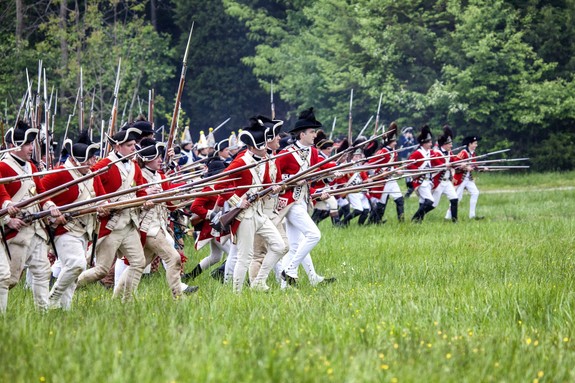 Learn about life in the 18th century and witness one of the largest Revolutionary War reenactments take place in Mount Vernon. Watch hundreds of Continentals, Redcoats, Hessians, cannon, and cavalry in action and meet General Washington. Wander through the encampment and discover how Washington used to work, sleep and dine during the Revolutionary War. Learn more about military techniques, mapmaking and surveying and even a camp laundry demonstration. 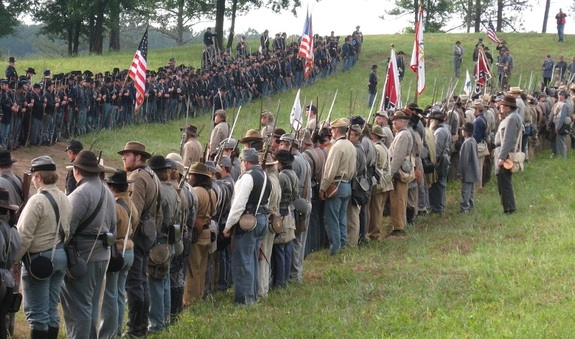 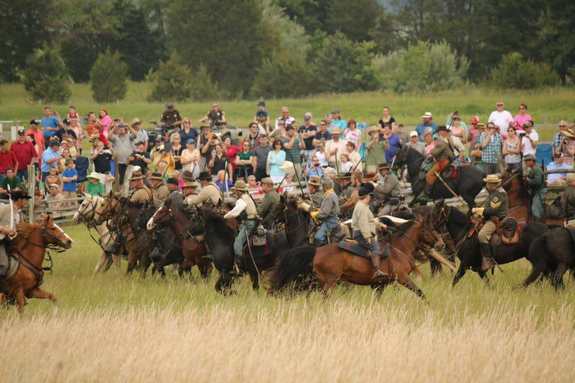 One of the oldest continual reenactments in the nation held on our original battlefield property. Experience Civil War soldier life as you visit on-going demonstrations and living history presentations prior to and after the battle each day. Walk in history's footsteps as you explore the sights and sounds of the Civil War with Artillery, Cavalry, Musket firing, Camp life, Medical Corps, and much more. Enjoy tasty treats from a variety of food vendors and shop for souvenirs on Sutler Row. 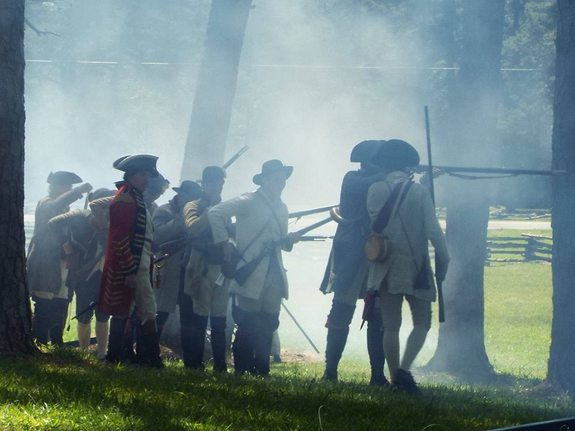 Fight for the Backcountry: Battle of Alamance Reenactment
May 18 - 19, 2019
Burlington, North Carolina

Experience North Carolina’s internal power struggle on the eve of revolution! “Fight for the Backcountry” will feature a recreation of the Battle of Alamance, and will explore life in the backcountry in the early 1770s, as the American colonies stood on the brink of revolution. 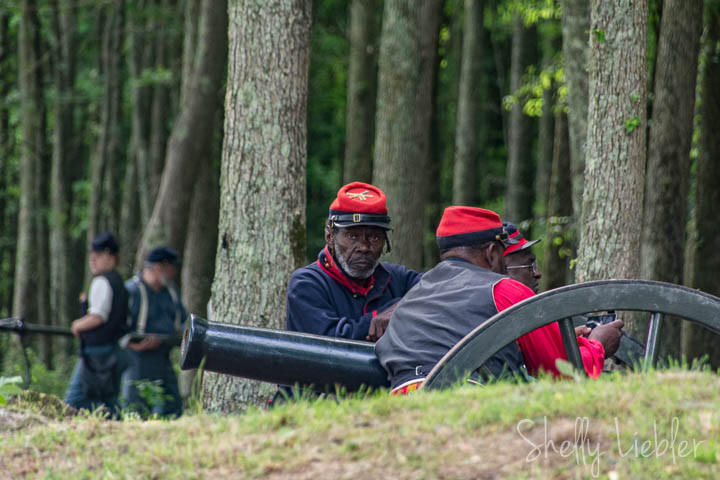 The historic events which took place on May 24, 1864 are remembered each year with a reenactment of the Action at Wilson’s Wharf. Military and civilian reenactors portray the lives of soldier and citizen inhabitants of the fort. There are family-friendly living history activities throughout the day including learning the art of field fortification. 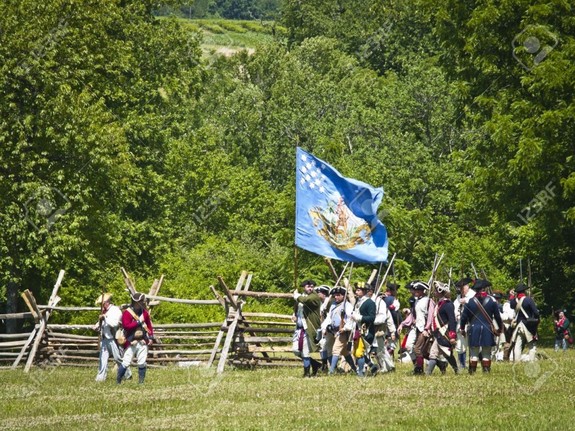 Featured on our list of top battle reenactments of 2018, come and experience what life was like during the Revolutionary War in this annual reenactment. See the Continental and British armies battle, just as they did in 1778. Hear the roar of Cannon and the crack of muskets! Activities will be held throughout the day. 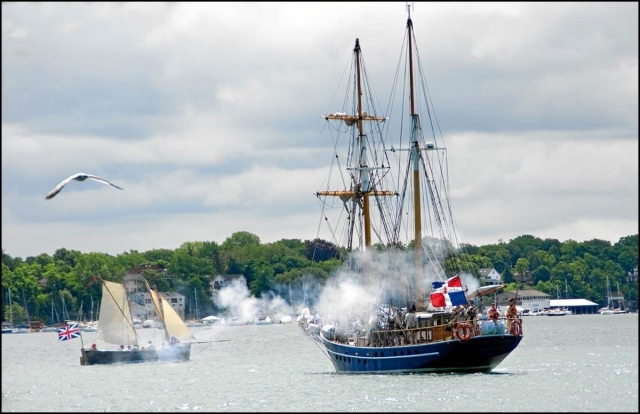 On its 40th year, this annual reenactment features hundreds of reenactors recreating the historic siege of 1759 during the French and Indian War with battle reenactments, siege demonstrations, a large camp of period artisans and merchants, cooking demonstrations, an exhibition of 18th century medicine, living history camps, artillery and musket firings, Native American councils and much more! It is one of the largest French and Indian War events in the world. 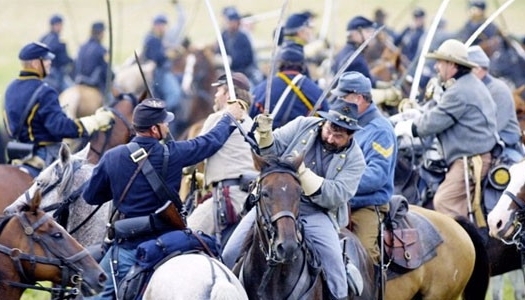 Featured on our list of top battle reenactments of 2018, taking place for over 150 years, enjoy 4 days of events and educational activities including Field demonstrations, a living history village with period food and music, Civil War merchants and military camps. Learn about Civil War medicine, music, weapons and daily life during the conflict that defined our nation and saved the Union. 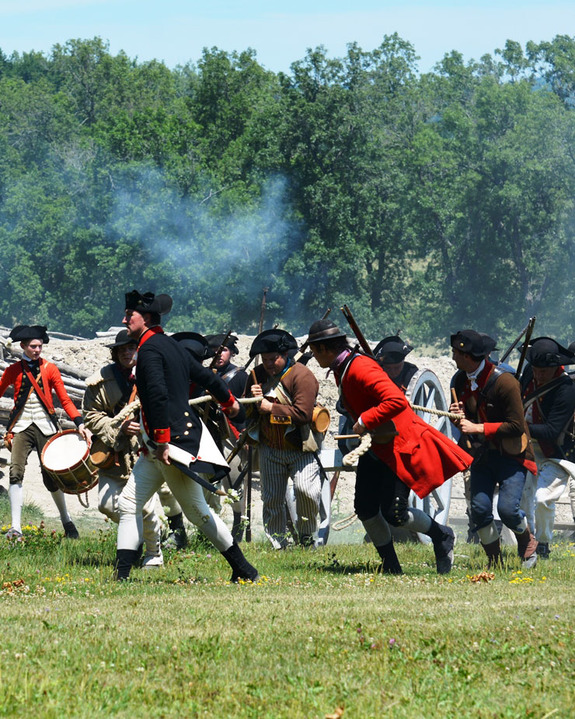 Highlighting the epic 1758 Battle of Carillon, witness how the British amassed the largest army in North American history to date yet was stunningly defeated by a French army a quarter of its size. Climb aboard tour boat Carillon and see the story from the waters of Lake Champlain and experience the fog of war and smoky haze of battle as the French and British armies maneuver across Fort Ticonderoga. 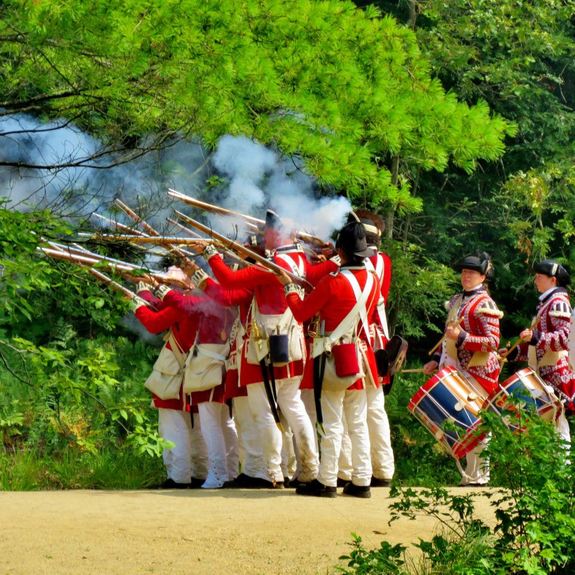 This annual history event is the largest military re-enactment in New England. It has nearly 1,000 soldiers portraying British, Irish, Spanish, Scottish, French and Colonial troops. Witness the daily life of those who fought to win America’s freedoms. Activities include mock battles and skirmishes, tours of the British and American camps, training and cannon demonstrations, musket drilling with kids, help with camp laundry, 18th-century baseball and many more.

256th Anniversary of the Battle of Bushy Run
To be announced
Jeannette, Pennsylvania

Watch as the forces of his Royal Highness King George III pit against a confederation of Native Americans.  See all the colors of war in the vibrant recreations of the two-day battle of Bushy Run that the various reenactors bring to life. Learn about how the battle progressed as well as how people lived in the mid-eighteenth century. Also featured are 18th century military camps, a sutler trade area, period craftspeople, and a children’s area. 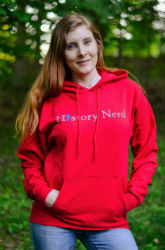 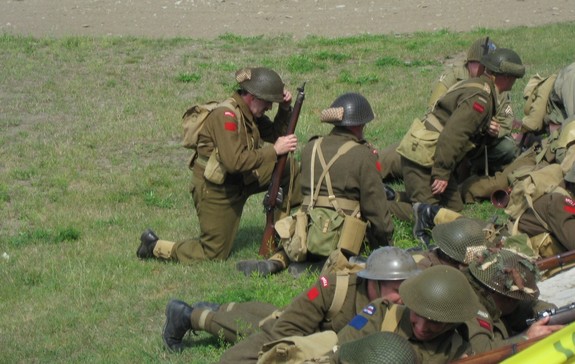 Featured on our list of top battle reenactments of 2017, one of the most realistic and educational annual reenactment of D-Day which happened on June 6th, 1944 and the largest WWII reenactment in the US.  Featuring over 1,200 re-enactors from across the United States and Canada happening on a 2250-yardlong beach and sloping adjacent terrain which closely resembles Omaha Beach in Normandy, France. 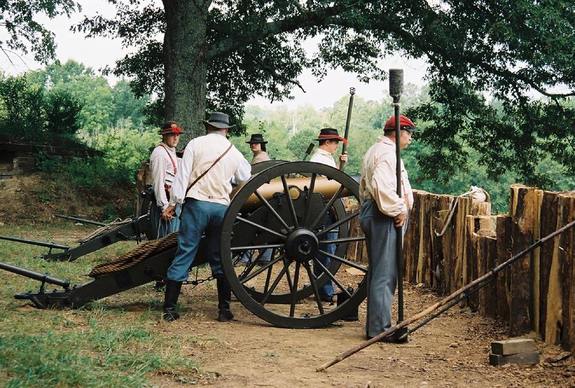 Visitors will enjoy a weekend of civil war reenactments, tours of the Historic Western & Atlantic Railroad Tunnel, Tunnel Museum, "Meadowlawn," the 1850 Clisby Austin House - headquarters of General William T. Sherman, as well as various food vendors and period sutler tents. Interact with the reactors, visit their camps, then find your spot to watch the battle unfold. 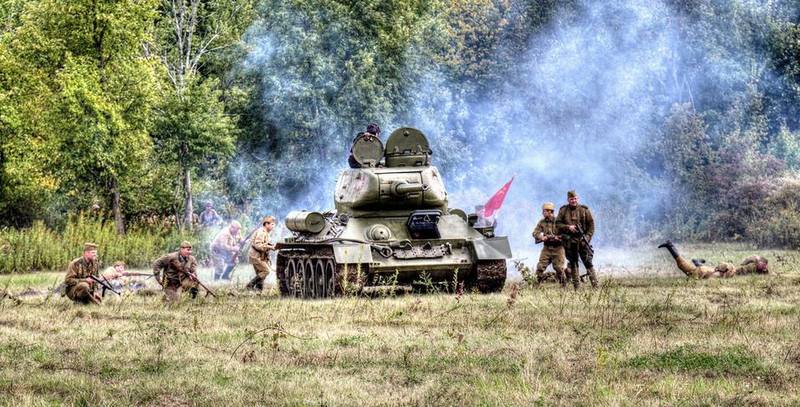 One of the largest WWII re-enactment events in the United States. Each year, witness elaborate and realistic battles complete with tanks, artillery, armored vehicles, and exciting pyrotechnic displays. With more than 1,000 re-enactors representing soldiers from the United States, Great Britain, France, Poland, Ukraine, Russia, Japan, Italy, and Germany, about 70 - 80 WWII vehicles, half-tracks, and other 1940s military vehicles make this a not-to-miss special event. 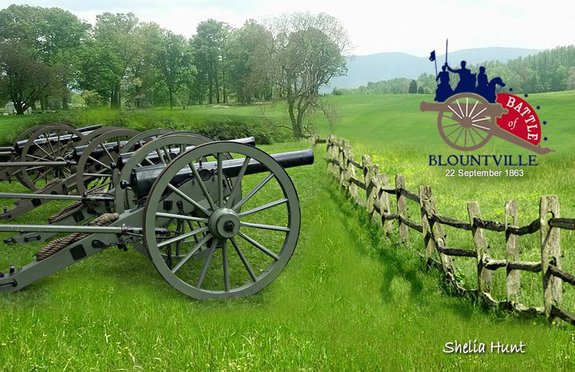 155th Anniversary of The Battle Of Blountville
September 27 - 39, 2019
Blountville, Tennessee

Preserve the legacy of the Battle of Blountville which occurred on 22 September 1863 in historic Blountville, Tennessee. This weekend-long history event will include authentic civil war camps, Infantry, Cavalry, Artillery, period displays, and exciting battles on both Saturday and Sunday. 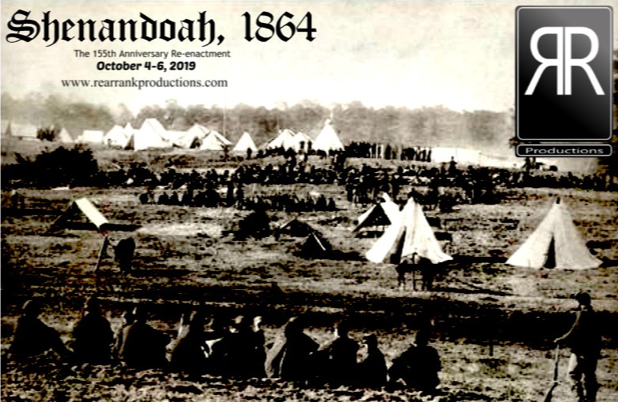 This event will feature unit specific detailed battle scenarios, even handed rule enforcement, correct force ratios, including artillery and mounted forces by invitation only, both campaign and garrison camping and unit specific impressions. 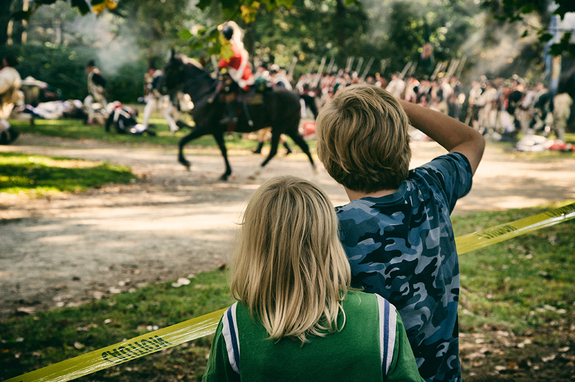 Come and join Philadelphia’s largest one-day history festival. Witness how the Revolutionary War turned Cliveden into a bloody battleground for General George Washington’s colonial soldiers as they battled the British in the fight to liberate occupied Philadelphia. Today, the Revolutionary Germantown Festival is a unique celebration attracting over 5,000 visitors each year with a day of family entertainment and reenactments of the Battle of Germantown. 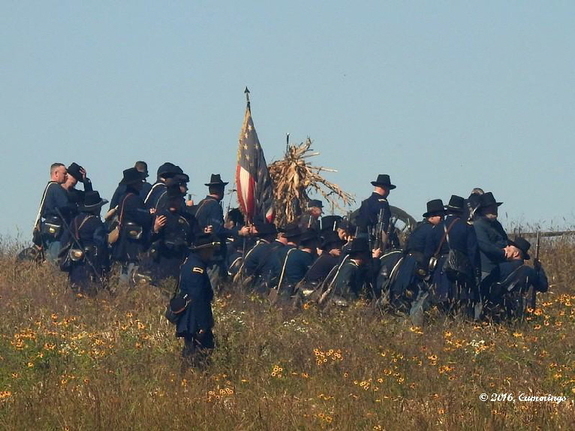 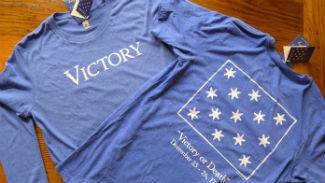 Available in both short sleeves and long sleeves 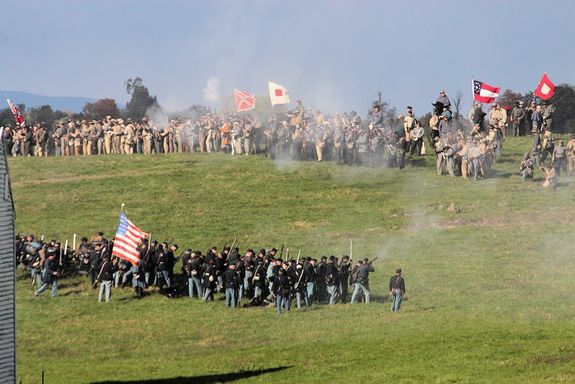 Experience military life at the annual reenactment of the Battle of Cedar Creek. Featuring living history camps, live period music, and educational demonstrations on the original fields in Middletown, Virginia where the original battle was fought on October 19, 1864. Included in the ticket are living history activities at Belle Grove Plantation and tours of the Manor House. 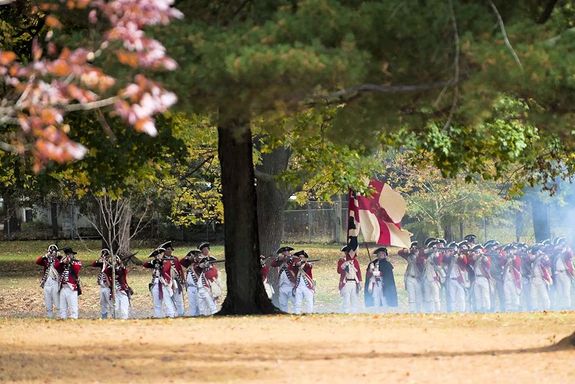 Celebrate America’s heroes at the Assault on Fort Mercer Reenactment, part of the 18th Century Field Day at Red Bank Battle Field Park. Enjoy battle reenactments, colonial demonstrators, vendors, food, and fun! Learn about the Battle of Red Bank and why New Jersey is called “The Crossroads of the American Revolution.” Tour the Whitall House and visit with our hearth cookers preparing delicious fall-inspired food. Kids will be delighted with the spectacular sword fight and enjoy a colonial magic show.

Hundreds of reenactors from across the country converge on the grounds of Historic Camden to camp, battle, and celebrate over the weekend. With more than 3,400 visitors who will get a chance to be a spectator for a battle each day, and they will be able to walk through the camps of the combatants while seeing demonstrations of Colonial crafts and skills. Colonial sutlers (merchants) and scholars giving talks about the war are on site as well.

If you have a favorite that belongs on this list, please let us know. And if you're looking for a special gift for a history lover, check out our store, which is what funds the operation and expansion of The History List.  You'll find shirts and stickers with our original design, special commemorative shirts, and signed books by noted historians.