Historic Sites On This Road Trip

Memorial Day is an American holiday, observed on the last Monday of May, honoring the men and women who died while serving in the U.S. military. Originally known as Decoration Day, it originated in the years following the Civil War and became an official federal holiday in 1971. Many Americans observe Memorial Day by visiting cemeteries or memorials, holding family gatherings and participating in parades. Unofficially, Memorial Day marks the beginning of the summer season.

We've listed special places to celebrate and to honor the people who served in the military. Some events are well known and some are smaller events at local institutions. If you know any which you think should be added to this list, put them in the comments. 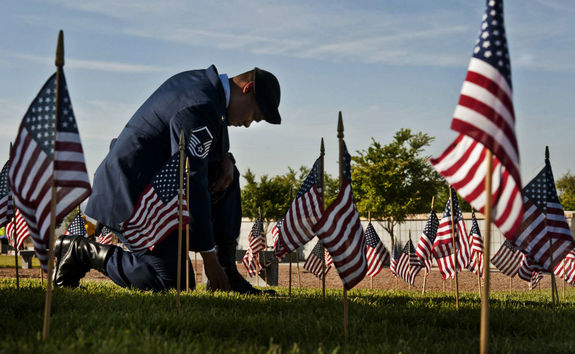 Memorial Day 2017 at The National WWII Museum
US Freedom Pavilion: The Boeing Center

Activites from May 27 - 29 include live performances by the Pensacola Civic Band and USMC Band New Orleans, appearance by Pearl Harbor survivor Frank Emond, a special Commemoration Ceremony and a National moment of silence and bell-ringing .

Memorial Day Weekend 2017 at The National WWI Museum and Memorial

Admission to the Museum is free for veterans and active duty military personnel, while admission for the general public is half-price all weekend (Friday-Monday, May 26-29).

The Memorial Day Parade will be on May 29, at 2 p.m. It will begin at Lefever Street in Gettysburg and head northeast to Middle Street; turn west on East Middle Street and south on Baltimore Street to the Soldiers’ National Cemetery.

The Memorial Day Ceremony will take place at 3 p.m. at the Rostrum in the Soldiers’ National Cemetery.

Celebrate Memorial Day Remembrance: The American Soldier Through the Ages. Join military living historians representing the American soldier of all time periods throughout our nation’s history. This year marks the 100th anniversary of America’s entrance into WW1 and the 75th anniversary of WW2.  Program is Saturday 10am-4pm, and Sunday 10am-3pm. FREE

Memorial Day is a day to honor our nation's heroes in solemn remembrance. If you plan to visit Arlington National Cemetery during Memorial Day weekend, please be aware of the following events taking place:

May 29, 2017. The service begins at 9 a.m. and includes a flag ceremony, the laying of wreaths and recognition of veterans in attendance, as well as musical entertainment and a variety of speakers.

This year marks our 90th Annual Little Neck-Douglaston Memorial Day Parade, and of honoring our fallen heroes.  It also marks the Centennial of World War I. The parade will be held on May 29, 2017 at 2pm.

Held at 11 a.m. on May 29, 2017at the Victory Arch, in downtown Newport News. After the ceremony, the public is invited learn about America’s rich military heritage at the Virginia War Museum.

This annual event honors our county's fallen military and public service personnel. he Memorial Day Ceremony will be televised at 7:30pm on May 29 on TVgwinnett, Gwinnett County's government access cable channel, and available on demand at www.tvgwinnett.com.

Join the City of Smyrna for Memorial Day at 20th Century Veterans Memorial on May 29, 2017 at 9:30 a.m. Seating will start at 8:30 a.m. and pre-ceremony/ceremony activities will begin promptly at 9:00 a.m. In the event of inclement weather, the ceremony will be held in the Smyrna Community Center (200 Village Green Circle, Smyrna, 30080).

Renton's Veterans Memorial Park, 523 South 3rd Street, opened in 2003, and offers a unique setting to view and reflect on the names of nearly 2,000 etched marble plaques. Each plaque represents and honors a military veteran who served their country. A Memorial Day Ceremony will be on May 29, 2017 at 1:00pm.

After the Veterans Memorial 5k race, take a few moments to grab a picnic lunch from one of the nearby restaurants and then join us in the Marietta Square for a Military Appreciation Celebration! For the third year, Marietta Mayor Steve Tumlin will declare our race day “American Legion Day” and we’d like to share the day with you!

On Monday, May 29 , 2017, Evergreen Washelli will host our Annual Memorial Day Commemorative Service. Please join us as we honor America’s heroes and heroines, and salute the flags on our “Avenue of Colors”.

Ceremony and Dedication of the General John A. Logan Monument

The Chicago Cultural Mile Association is honored to host the Annual Ceremony and Dedication of the General John A. Logan Monument, which has been taking place since 1996. This Memorial Day wreath laying and monument rededication commemorate those who died serving our country.