Wood National Cemetery is located on the grounds of a former Soldiers Home that today is called the Clement J. Zablocki VA Medical Center, Milwaukee, Wis.

From 1867 until 1871, the home buried its soldiers in private cemeteries in the Milwaukee area. In 1871, a cemetery opened on the grounds. Originally known only as Soldiers Home Cemetery, it wasn’t until 1937 the name was changed to honor Gen. George Wood, a longtime member of the Soldiers’ Home’s Board of Managers. It became a national cemetery in 1973.

The cemetery is part of the Northwestern Branch-National Home for Disabled Volunteer Soldiers National Historic Landmark district, designated on June 6, 2011.

A memorial pathway is lined with a variety of memorials that honor America’s veterans. As of 2003, there were seven memorials along there — most commemorating soldiers of 20th-century wars. 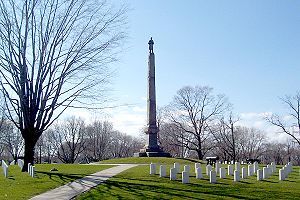