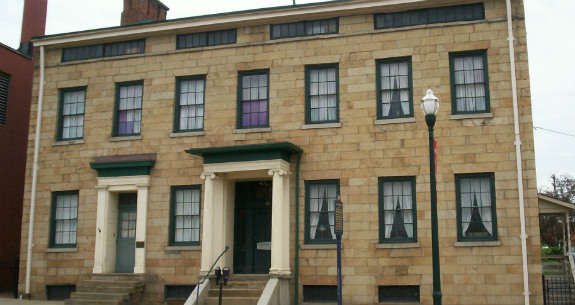 Photo by Midnightdreary / CC BY

The stately stone house, located at 49 East Maiden Street in downtown Washington, Pennsylvania, was built in 1812 by John Julius LeMoyne, the father of Francis Julius LeMoyne. Both father and son were practicing physicians, but it was the courageous Francis Julius LeMoyne who, despite the strict Fugitive Slave Law of 1850, risked his personal freedom and fortune to do what he knew was morally right — take a stand against the institution of slavery. This successful 19th Century doctor, reformer and builder of the first crematory in the western hemisphere, opened his home and properties as stops along the Underground Railroad, the series of safe hiding places for runaway slaves as they trudged north on their precarious journey to Canada and freedom.

The father of five daughters (and three sons!), he also believed in and promoted education for women, specifically helping to found the Washington Female Seminary. Always a supporter of education, this successful physician funded several chairs at Washington College (now known as the prestigious Washington & Jefferson College), started Citizens Library, a free public library for the people of Washington and neighboring communities, and founded LeMoyne College (now known as LeMoyne-Owen College) in Memphis, Tennessee, predominantly for the education of the newly freed slaves. The LeMoyne House is now a museum filled with period artifacts and dedicated to Dr. LeMoyne's memory.