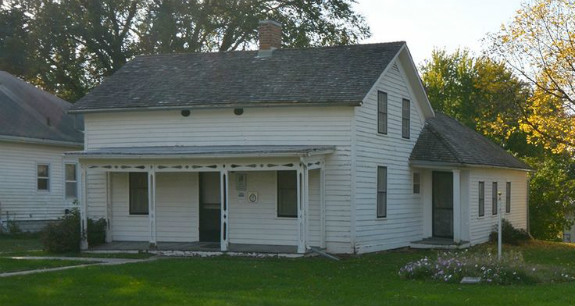 Central to the activities of Gaston and Rev. Todd were two prominent properties that are included in the Tabor Antislavery Historic District: the Public Square (known today as Tabor City Park) and the Reverend John Todd House.

Todd's house, a two-story, clapboard home built in 1853, was an established Underground Railroad stop and perhaps the most significant "hub" on the Underground Railroad in Western Iowa.  John Brown himself came through Tabor on many occasions, including during his escape after his celebrated "invasion of Missouri." On this occasion, 14 slaves were rescued, though one slaveholder was killed. Todd decried the violence but still provided aid to the escapees during their northward trek. The basement of the Todd House was also used to store arms later used in Brown's violent raid on the federal arsenal at Harper's Ferry, Virginia, though Todd had no knowledge of Brown's apocalyptic plans.

Todd continued to build upon Gaston’s antislavery rhetoric after the official establishment of Tabor and recruited abolitionist Congregationalist ministers, such as George B. Hitchcock of nearby Lewis, Iowa, to come to the Great Plains to aid in the struggle.  Many of Todd's sermons focused on slavery's evils, often using sentiments expressed in the Declaration of Independence to address the paradox of slavery in a "free" society.  Todd served as a chaplain in the Union Army in 1864 and was instrumental in building progressive Tabor College, founded in 1866 and open to all students regardless of race or gender.