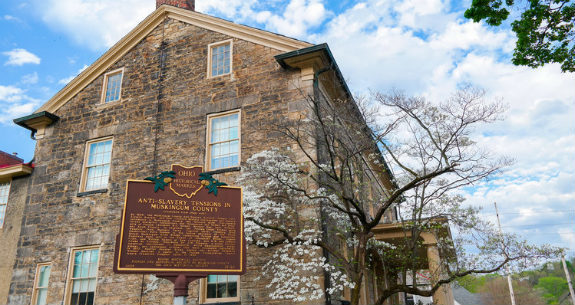 Located in the Putnam Historic District, The Stone Academy is one of the oldest and arguably the most historic building in Muskingum County. Constructed in 1809 by Dr. Increase Mathews, Levi Whipple, and Ebenezer Buckingham, it was designed to serve as the new state capitol building. Across the river in Zanesville, then a separate and rival community, John McIntire and others constructed a building of their own with the same goal. Zanesville was selected and served as the capital of Ohio from 1810 to 1812.

The Stone Academy functioned as a school and a public building until it was converted to a private residence in 1840. In the 1830's it was the center of abolitionist activity in Putnam. The Ohio Anti-Salvery Society held state conventions in the building in 1835 and 1839. On both occasions violence erupted when mobs of pro-slavery Zanesville "Tuckahoes" disrupted the proceedings.

The building also served as a station on the Underground Railroad. The museum's most popular exhibit highlights a hidden trap door under the staircase that accessed a craw-spacewhere run-a-way slaves hid.

Another popular exhibit features books written by author, actress, and activist Elizabeth Robins who lived in the building in the 1870's.

Other highlights include historic portraits of John and Sarah McIntire and others, several murals, Allwine and Bailey furniture, pottery, Native American artifacts, an historic timeline of Putnam, exhibits from Zanesville's old bridges including the famous Y-Bridge, a tribute to John Glenn, and many other items illustrating the history and culture of Muskingum County.