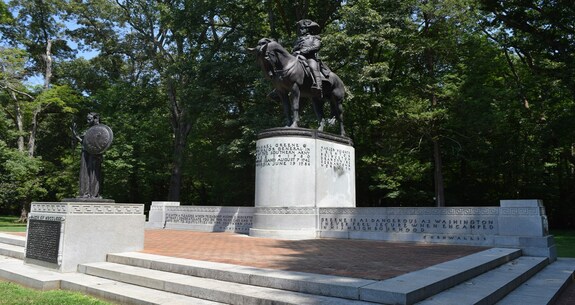 After the failures of Generals Lincoln and Gates, General Nathanael Greene is tasked with contesting British control of Georgia and the Carolinas. He confronts General Cornwallis’ army at Guilford Courthouse in North Carolina.

Although much of the American line is made up of militia, they manage to hold off several British charges. The fighting becomes so entangled that General Cornwallis is forced to fire grapeshot into both his own men and the enemy in order to break it up. The British manage to win the field but are greatly crippled by their casualties.

In the Visitor Center you can view exhibits, including artifacts from the battle, and two interpretive films.

You can tour the battlefield by bicycle or car, or by foot. The following self-guided cell phone tours are available:

The park also includes the Hoskins Farmstead Site, purchased by Joseph and Hannah Hoskins in May 1778 after they fled from the war in Chester County, Pennsylvania. The site features a log house built by the Hoskins’ son Ellis in the 1810s, a reconstructed tobacco barn altered to function like a historic Summer kitchen, a blacksmith workshop, and a barn.

Guilford Courthouse National Military Park has 29 monuments and gravesites that commemorate the Battle of Guilford Courthouse. The monuments were erected along the American lines of battle beginning in 1887, after the land was purchased by David Schenck who established the Guilford Battle Ground Company. The General Greene Monument was dedicated on July 3, 1915.